She had only bought the pig because the stain wouldn’t come out of the carpet. It was a bad stain, an ugly stain, and, in all truth, she was struggling to live with it. When anyone walked into the room, whether a man who had never been there before, or a family member popping round for tea and a slice of Jamaican ginger, their face would change. The atmosphere soured in an instant. If a body had decomposed on that very spot, it would not have made a worse stain. 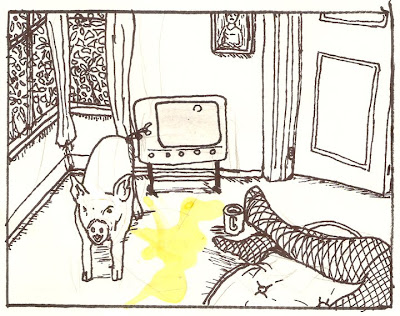 I don’t watch the telly anymore. Not since getting the pig. I watch the pig instead. I stare into the tv’s dull grey and watch the pig’s reflection. I would never risk looking at the pig directly in case our eyes met. He would know in an instant that he was only there as a porky smokescreen, an impossible stain-maker.