A mist rolls in across the sea, billowing and thickening around the jagged spines of off-shore rock. Two men, hunched into a crevice on the largest of these rocky outcrops, are smoking roll-up cigarettes. The bluish hue of the smoke they exhale is swallowed instantly by the mist. The blink of the Mevagissey lighthouse is the only thing that penetrates the mist, and then only occasionally.

One of the men reaches into a leather satchel and removes a litre bottle of Asda Smartprice dark rum. He unscrews the lid with three sharp turns before taking a deep swig. He wipes the excess from his lips with the coarse fabric of his sleeve, before tipping the bottle’s neck in the direction of his companion. The bottle is passed back and forth between the men for some time until only a third remains.

The lighthouse flashes again off to the west. The larger of the two men stomps his feet on the rock in front of him. The sound falls in time with the rhythmic churn of the sea, the action lost to the mist.

‘Is it nearly time?’ the smaller man croaks.

The reply comes a minute later; slow and thoughtful,

‘Prepare yourself, Jim. It is approaching.’ 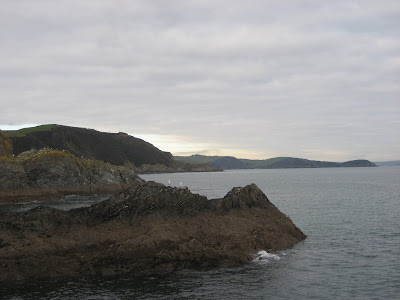 The smaller man lights another cigarette. The flame from the match illuminating his face for a brief moment. The skin around his eyes is red and blotchy; small sores weep just below the eye-patch that covers his right eye. The larger man stands, the leather cape he wears unfurling with a dull slap. He reaches slowly inside his cape and removes a bundle. He places the cloth bundle on a shelf of rock behind him and turns to look out to sea. In turning, he dislodges the bottle of rum from its resting place and it smashes on the rocks below.

‘What the hell are you doing? There was still some in there, you dumb whoreson. I paid for it out of me own an’ all.’

Again, only the sound of the sea for several long seconds, then,

The larger man turns once more and starts to unravel the cloth bundle with care. Eventually he removes something from the dark folds and holds it out in front of him with both arms outstretched. The lighthouse blinks in the distance. A match is struck, a cigarette lit, and then flicked to the rocks below. A burst of flames rushes up as the rum ignites. There towering above Jim is the large figure of Blackbeard with his hat angled over the top half of his face. In his right hand is a musket. The flames die away, dowsed by the spray of the sea and it is impossible to see that his beard is in fact ginger.

Tugging on a length of thick rope, Jim pulls until a small wooden rowing boat comes into view alongside the lower section of rock. Jim uses his foot to steady the boat against the rock as Blackbeard climbs in. Jim follows him in before pushing off into the mist. Taking up the oars, he starts to row further out to sea.

Three orange lights in a rough triangle are just visible a hundred metres to the starboard of the rowing boat. It was as Blackbeard had expected. He signals to Jim to stop paddling. The boat drifts silently towards the three lights. A commercial fishing vessel comes gradually into view, emerging from the mist.

Blackbeard stands silently and leans across until his hands rest on the side of the fishing boat. Then with one fluid movement, he shifts his weight forward and then up, pulling himself onto the deck.

Jim down below manoeuvres their rowing boat to behind some netting that hangs off the side of the fishing boat. The rhythmic put-put of the boat’s motor sounds out as it heads towards land. The first musket shot splits the night. Jim shakes violently at the deep boom. From somewhere above, he hears Blackbeard’s booming voice. Another shot rings out. Then a Tesco carrier bag lands in the bow of the rowing boat and Jim stops shaking. He does not look inside.

For the next forty-five minutes, Jim paddles hard through the mist. His arms are completely drained of their strength, but still he paddles. The silence drives him; the silent lure of the bootie. A watery flash from the lighthouse signals that they are approaching land.

Jim drags the boat up onto the sand at the far side of Pentewan beach. Light from the holiday caravans falls upon their haul. Both men sit contemplating a plastic box full of ice with two small unidentifiable fish squashed broken-backed in a corner and a carrier bag of cockles and pebbles.

‘Aaaargh,’ Jim yells, before taking off his eye-patch and throwing it towards the sea.