A holy man carrying a plate of offerings and what can only be described as religious paraphernalia pushes onto the overcrowded mountain bus. He winds his way through the bodies until he faces me. He then hits me on the head twice with a giant peacock feather. I meet his wild eyes but give him no money. I feel uneasy for the entire journey. 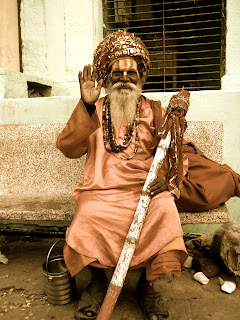 There is a child turning cartwheels down the narrow aisle of the train. His face is painted like a tiger. He cannot be more than four years old. Further down the carriage his family, a group of musicians from the desert, sing sad songs. They are all dusty and wild. 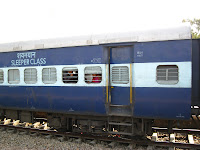 The fire has died. The perfect round pops, the sound of petrol-smeared bubbles bursting, of the camels’ farts have become less frequent. All of the stars seem to be moving now, even the ones I recognise and know don’t move. I am in the Thar desert, 30 kilometres from the Pakistan border, lying on a blanket on the sand. It is night. I am wearing all of my clothes. I am in a sleeping bag. I have three blankets piled on top of me and still I push closer to her for more warmth, for some contact that means I won’t die out here. The hood from my hoody is tight around my face so only my eyes show: I fear that my eyeballs will freeze. A wind whips across the undulating sands, dipping down to slice through every layer like a scalpel. I am as cold as I can ever remember being. I lie there and I shake and I silently wait. When the first light of day slides down from the dunes and comes to rest on her beautiful sleeping face, my eyeballs thaw instantly and I know that I have made it. 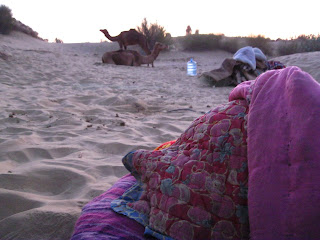 Varanasi is a holy city brimming over with temples; amongst such holiness, alcohol is understandably scarce. But then a boat party is a boat party, and a boat party on the Ganges is just that and needs beer. 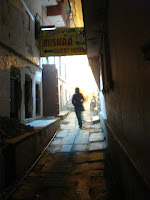 I am running after him, darting where he darts, turning blindly where he turns. For twenty minutes, I chase a shadow down narrow alleys ankle-deep in faeces and dotted with puppies walking with legs-splayed. Then the alleyways narrow to passages, then further still until I am making my way along a concrete corridor no wider than my shoulders. It leads to a concrete room with a simple wooden bench, a row of eyes struggling to focus, and an overwhelming stench of stale sweat and beer. A man sells me cold cans through a small hatch. He knows there is a boat party and that some things are holy. 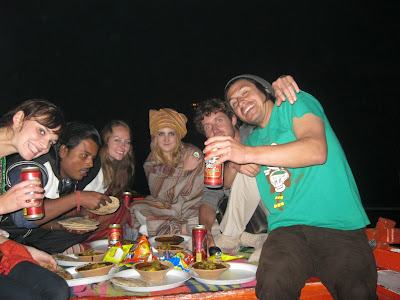 The Donkey King of Jaipur

It is the purple jacket and the showman’s grin which confirm that I am in the presence of the Donkey King. A ringmaster, a general, a master of ceremonies. He coaxes the donkey with a mix of deep affection and aggression. The other children and adults around him react in the same way – bowing to his every movement – for he is the King. 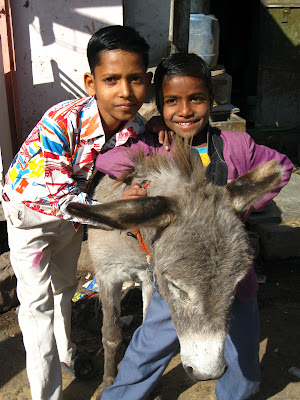 It is a hot dusty day in the Old City. Dogs yelp if they wake for long enough to feel the sun’s blaze on their coats. There are few sounds that penetrate the general din; irritability buzzing like a mosquito around your ear. And then I hear it – fat brass breaks. Some serious soul shakedown: loud and proud. A quick scan of the area reveals no likely source of this sound – there is no soundsystem, no stage, no open space – just a row of shop fronts and doorways. Activity is minimal.

Eventually, I meet the eyes of a man sitting at a desk in a small room; he raises his eyes at me. I walk over slowly; weary of being persuaded into parting with money. As I approach, he nods over towards a tiny door in the corner of the room. He pushes the door open to reveal 15 Indian men blowing into various brass instrument as if their lives depended on it. Their puffed out cheeks and bulging eyes are the source of these ultra-funky breaks. The sound is deafening and as funky as anything I’ve ever heard. After a few minutes of sitting reverently in a trance, I get to my feet and begin to dance in the middle of these men. They cheer as I spin faster, dance harder. Soon a man breaks off and joins me, twirling money around the head of a trumpeter who lets rip an unholy solo. I follow suit, losing myself in the music and waving a note above his head as he kills it again

A man with a striped T-shirt and a red hat is taking a piss at the roadside. It is like Where’s Wally? if Wally had an elongated foreskin that glowed in the moonlight. 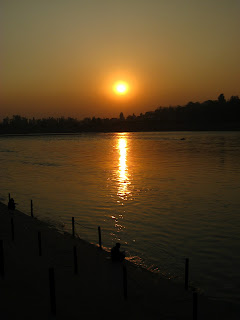 Babas sit on steps, never too far from the Ganges, each with identical skinny legs and shiny knees that reflect the sun. Westerners cloaked in shawls with red tikas float around mentally practising chants or running over a new tabla beat.
Monkeys swing and climb around the two suspension bridges, waiting to be fed by nervy Indian tourists.
The river flows brightly through and beneath it all, serene turquoise, constant. There are cows dappled by sunlight, foraging amongst the trees, belching. Political trucks taking blind bends blindly, blare out songs and slogans for the upcoming election.
Yogis in flaming orange robes with beards bushy and brilliant ride mopeds or walk purposefully around the ghats, arms behind back, surveying. The green hills busy themselves forming valleys and ‘V’s, feeling impermanent in the changing light and morning mist. Men bathe delightedly, fussily, in the waters. Time passes. 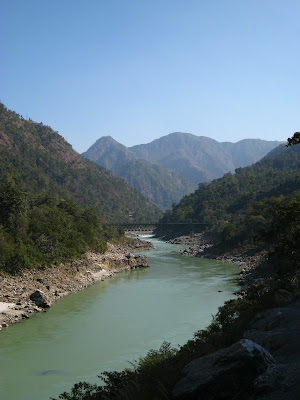 Click to read about the poverty and horror of Old Delhi.