Forget cheeky, monkeys in India are utter bastards. Plain and simple.
On the Indian subcontinent, a constant battle wages between man and monkey. Neither man nor monkey appears particularly unhappy about the situation. It is part of a daily, even hourly, routine: a near playful back and forth that is so commonplace that the conflict barely causes more than a mild annoyance for either side.
Here are some reports from the frontline:

A shopkeeper is throwing large chunks of brick up at the window sills above his shop. A monkey has been doing the wrong kind of stock-taking. The bricks bounce against the wall and fall perilously to the street below. Nobody cares.

A holy man climbs, chest heaving, up the several flights of stairs to bring fresh flowers to drape on the trishula, Shiva’s trident. Monkeys love these flowers. Their monkey mouths know nothing more delicious than these garlands. They are something to be nibbled at, each bright petal savoured. And the bright orange gleam of a new garland, like the one carried by this holy man, is a beacon to the rooftop-dwelling rapscallions. Within minutes of a new garland appearing, the thunderous thump of their paws on the restaurant’s tin rooftop fills the air. But then the eerie silence descends as they swing soundlessly to hidden vantage points to wait for the perfect moment to pounce. 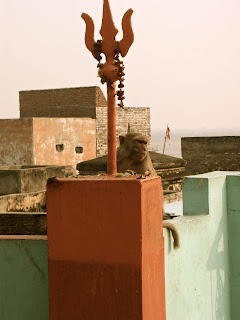 In the instant when a fresh curry is being collected from the kitchen or a soda bottle opened for a diner, the monkey jumps up onto the platform and starts to pick off individual flowers, breaking them meticulously into morsels before delightedly placing them in its mouth. In comparison to the whole process leading up to this moment, it plays out in comparative slow motion. Languid even.
It just so happens that the head waiter in this restaurant has a gun to discourage this very activity. It is a black BB gun that he wields with all the threat and finesse of an action hero. The first time I looked up from my lassi and saw his wild, wild eyes and the pistol I thought my game was up. It was not, the game was afoot. The monkey dodged a pellet and laughed. Another shot rang out.

Another day, another monkey, another caper – same restaurant. It is warm today in Varanasi. The sun catches the fluttering kites, making those brilliant triangles dance. The owner of the restaurant, a strange man with a beenie hat and an odd habit of saying about every item on his menu: “Try the (insert name of dish) in every restaurant in Varanasi then come back here and try mine. Then you will know it is the best.”
This man and his catchphrase are drying a pair of jogging bottoms in the sunlight on a wall. A monkey descends from the roof and snatches them up and skips off with them. I indicate to the man what has just happened and he says: “It’s okay. He will be back soon and I give him a banana then and I will get my pants back. It happens each time.” 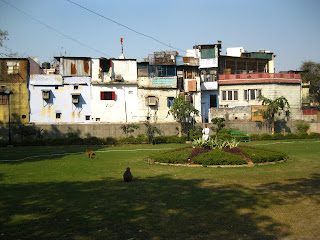 The monkeys line the turrets of Agra Fort like cherries topping an elaborate cake. The amber of the fort compliments the auburn blaze of their coats.

A baby monkey sits on a turnstile near the entrance to the fort – a vision of complete calm.
Rickshaw drivers swarm around me, pulling at my sleeves, tapping me on the shoulder – the very opposite of calm. I stare transfixed at the baby monkey so relaxed amongst the din. I feel a need to document this bubble of stillness in the chaos, bottle it, capture it so that I can draw upon it in times of intense weariness. I remove my camera and line-up the shot…
I don’t see it coming: the parent monkey, wild with protective instinct, charging towards me along the wall. In fact, the first moment I become aware of the demented creature is when its claws are tearing through the flesh on my arm. The pain is intense. I’ve been savaged by a monkey, been clawed by a primate, been marked as a seeker of serenity in a world of noise, in other words, a fool. 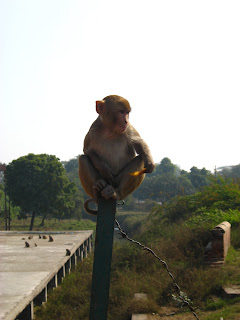 Round Six – The Rabid Monkey and the Icecream

I don’t like the term rabid. It’s so course, so vulgar. When I had a mane, a glorious gorgeous thing that would flutter just so in the evening breeze, I would not even sully my mouth with such a nasty little word. That was before I suffered my fall from grace, inevitably like all kings and great leaders.
An encounter, passionate, unfettered amidst railings and geraniums, with a girl of questionable morals and a low social standing (to put it politely), is what did for me. For those blissful 20 seconds though, she was Cleopatra and I, Anthony; Delilah and Samson, Camilla and Charles. But, oh how I paid. What a curse was levied upon me. It made me a monster.
Look at me. Don’t try and ignore me; to shuffle off into the shade unnoticed, you husbands to subtly swap sides with their wives, shielding them, from what? From me? My face has melted, more so ruptured in pores like a volcano, rapidly obliterating a once serene landscape. The decay did stop eventually but only after it was too late. Any normality, any of my former handsome qualities, were obscured forever beneath sallow candle wax deformity. I never noticed my eyes turn from brooding hazelnut to fiery amber either. Just one day, in the sequin of a sari, I saw a devil staring back at me.
But worse than all the physical atrocities, the lowest blow is my insatiable desire for icecreams. I used to eat only the ripest berries, melt-in-the-mouth titbits, and the brightest of orange flowers from holy garlands strewn in high and holy places. Now, I chase tourists for the hope of a lick of a lolly, a bite of a chocolate icecream, the tang of e-numbers and artificial flavourings. I am a monster and I am pathetic. 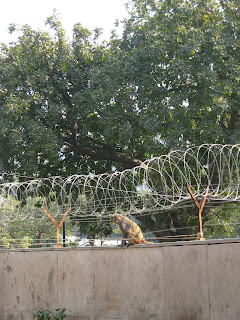