There’s something endlessly exhilarating about running the gauntlet, negotiating po-faced officials in starched uniforms with nothing more than a little red book and your best ‘I’m okay’ face, passing from one predefined space with its own language, currency, political system, customs, monarch and so on into another that has the potential to be entirely different. In the course of a mile, a harmless hand signal could become the most offensive of sexual gestures. Then there’s the petty corruption, the hidden charges – a dollar here, a dollar there to save you the indignity and time of having your luggage searched, a more thorough check being carried out on the validity of your visa or worse-case-scenario being bundled into a dark, musty cupboard for an hour or two of solitary confinement.

There’s also the immediate topography of the border crossing; the way the space between two countries in defined, delineated – from the layout – huts and uniformed officials from neighbouring countries with historical, and sometimes current, fraught relationships, separated by little more than a lowly dirt road or a featureless stretch of concrete; the geography – how each barrier, each door, provides both physical and a more significant symbolic barrier to detach and exaggerate any potential differences in wealth, lifestyle or politics between two countries. All of this is accompanied with the nagging, if remote fear, that you might be found lacking in the correct documentation and be carted off by scary men with guns. 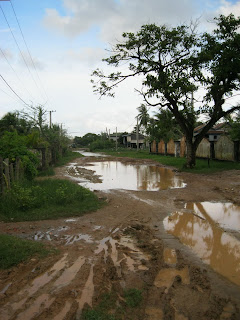 And of course there are those characters, both human and architectural, that inhabit these nameless hinterlands, these no man’s lands, with purposes that never seem wholly legitimate but are endlessly fascinating. Like the moto drivers defying gravity and various other laws of nature as they take an impossible amount of goods from one side to the other like Evil Knevil on a country-hopping shopping spree. Like the twitchy shifty-looking men with a fistful of passports and a wallet full of moulah. Like the Casinos. Like the sweat-stained and leery taxi drivers squabbling with clenched teeth over potential passengers. Like the travel reps trying desperately to look non-threatening and genuine but somehow failing to do either.

And so it is, after a three hour journey on the red dirt pot-hole-strewn road between Kep and Phuk Than in a clapped out Daewoo crammed with five tired and wet people, I arrive at a beloved border-crossing, this time between Cambodia and Vietnam. The rain, as it has been for the past four days, is teeming down, unrelenting. I have my raincoat on, my small backpack strapped to my front, and my large pack dragging me ever closer to the slurry below. The driver explains that we have reached the point, this is as far as he goes. There’s a no entry sign on a barrier with a gap between it followed by a maze of potholes and puddles leading to a small concrete building – the Cambodian Passport Control Point. Scrutiny and a stamp and onwards.

After wading a further 300 metres from the Cambodian hut through puddles of rusty rain water, I arrive at the Vietnam immigration building, housed to the left of an impressive arch welcoming you to the country. It seems in these situations that it is more important to make a big deal, architecturally at least, in welcoming you to a country rather than saying goodbye. As far as I’m concerned, goodbyes should be more muted affairs, quiet, reflective just like a small hut on a dirt road.

Inside the building, instantly drab and dismal in comparison to the arch, I arrive initially at a desk for disease control, located to the right of an airport-style scanner that is not plugged in and looks suspiciously like it is made from cardboard. At the desk you must fill out a small yellow paper sheet detailing what diseases you have or confirming those you don’t have. A thermometer gun is then pressed against your flesh, presumably to confirm that you are telling the truth – all of which comes with a nominal fee of a dollar. I wonder if I had a disease like AIDS or Syphilis or any other on the list if they would still charge me a dollar. Do they take pity and let you in for free or charge you more for being afflicted? Anyway, unlike at the Thai-Cambodian border crossing at Poipet, it serves to put some distance between this gentlest whiff of corruption and the smart-looking official in uniform checking passports at the next door, lumbering it with this sleepy-eyed low level civil servant.

A few more mandatory but unnecessary passport checks and I find myself officially in Vietnam. I return my passport to its rightful place next to my groin and get into a taxi – Good Afternoon, Vietnam. 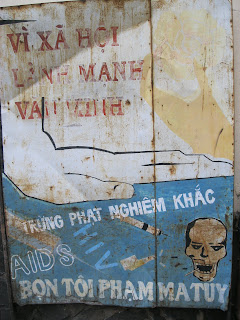