I have a golden rule when travelling and that is to never undertake a journey drunk or hungover. In Cambodia, and many other countries, there’s every chance that your journey could take several times the quoted time. It is also likely to be extremely uncomfortable – too hot, too cold, smokers, spitters, farters, shitters, broken seat, fat fella, baby screaming, body odour – and this is all under the proviso that your mode of transport doesn’t breakdown altogether. These nightmarish journeys can only be survived with a perky disposition and several hours of sleep. With a hangover, they are torture. Sadly, for a golden rule, it is one that I break all too often…

I am stumbling along the banks of the Tonle Sap river in Siem Reap at 3:30 am. At 6 am I am due to embark on a notoriously arduous boat trip to Battambang. My brain does not like that math. At 4 am, I fall clumsily into a light and trippy half-sleep; it lasts all of an hour and a half.

With eyes crusted shut and a foggy head, I attempt to pack my backpack in some logical way. I fail. Without time for breakfast, I am thrust unceremoniously onto a coach and wedged crudely between giant backpacks. The owners of these backpacks are a bunch of bright-eyed, bushy-tailed bollock-chops who actually seem to be enjoying being up this early and being rogered by the potholed dirt roads that lead to the port.

Finally arriving at the port and with all the confidence of a recently-robbed pensioner, I negotiate the steep steps down into the hull of the boat. I hit my head on a ceiling beam. In a way, I expect it and almost feel like I deserve it. Before I have time to slip into a well of self-pity, I spot a large wooden box, which despite the boat being overcrowded, is entirely devoid of buttocks. I clamber past people, pushing at any soft body part that happens to get in my way, before deflating in a sweaty heap on top of it.

It does not take long for me to discover just why this wooden box was empty. Not only is the box vibrating in a manner so intense that it is in danger of dislodging the contents of my bowels (a bout of incontinence five minutes into an eight-hour journey would not improve my mood), it is also hot. Actually, the once-innocuous oh-so-inviting box is so hot that it is scolding my testicles through my trousers.

It is only when the black toxic smoke starts billowing up from between my legs that I realise that I am sat on the engine and that it is about to explode. From out of nowhere, a Cambodian man runs up and in one fluid motion pushes me off the box and lifts the lid to reveal an archaic collection of pistons going like the clappers, chugging away spluttering and spewing out smoke. It appears that a mere inch of pinewood is all that separated my sainted-arse from a severe flambéing from an Industrial Revolution museum piece, a hunk of metal pilfered from an eighteenth century Mankunean canalboat. Also, I’ve now lost my seat. 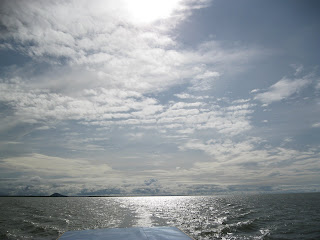 The only option left is the roof, an area approximately four metres wide and eight metres long and entirely devoid of seats or any other comfort. But wait one minute, the roof is a godsend. The views are incredible. After negotiating the narrow waterways around the port, the boat emerges into Tonle Sap, a lake that quadruples in size during the wet season to 14,000 square kilometres. With such stunning views, a delightful breeze and my bottom a safe distance from the engine, I am slightly less miserable, maybe even happy.

And it gets better. Soon the boat is chugging merrily through a series of floating villages, where smiling fisherman enjoy a simple existence on houses built on the water. The children, hearing our boat, rush to the windows and out onto the porches of these rudimentary houses and scream and wave. In a cross between Where’s Wally? and impersonating the Queen, me and my fellow roof-dwellers are tasked with spotting the screaming children amongst the buildings and foliage, and waving regally to them until your wrist can do no more. It doesn’t get boring either; even when we pass through the sixth or seventh village, it still delivers smiles. Such a fine tonic to the hangover and sleep deprivation.

About 1pm, the sun has cranked itself up to somewhere in the mid-thirties. The paint on the boat is beginning to peel and chip off in little glittery pieces that merge with the sweat and suntan lotion on my body. I look like a nursery school painting. And I feel terrible. My drinking water is hot enough to make tea with. You can fry an egg on my frown.

The sun is not the only problem. For the last thirty minutes, the boat has exited the main river and is making its way through a narrow channel through jungle. The distance between the trees has steadily reduced from the width of the boat to now little more than a metre. Branches and vines are indiscriminately whipping their way across the roof area with a vicious energy as the boat ploughs on.

Nature has turned on us – with the sun and now this, it is a full-scale assault, both cruel and unrelenting. The woman in front of me is bleeding from her shoulder where a vine ripped through her flesh as if it were tissue paper. The whole roof has transformed from a sun-addled floppy love-in to an alert unit primed for the next attack. The metre channel has now disappeared entirely and we are forcing our way directly through thick jungle.

Everyone is poised, crouched, eyes ahead looking for the next assailant. Those roof-dwellers that remain are now ducking the larger branches with some success, all the time shielding their eyes from the trailing vines that are impossible to avoid. Leaves and twigs are constantly collecting on the roof, crudely torn from the trees by the boat that has no option but to continue at full power. The roof is a blur of movement, women and children diving for cover, men swaying side to side, red raw and bleeding from at least one wound. It’s intense.

To make matters worse, if that were even possible, living in these treetops are some seriously freaky bugs that now, finding themselves homeless, are frantically crawling and wriggling through our hair, around our bodies and into our clothing. Ants of all sizes and colours, praying mantis’, cockchafers; spiders, millipedes and a hundred other creepy crawlies that are hideously ugly, almost certainly poisonous are having an ugly bug ball on my balls. 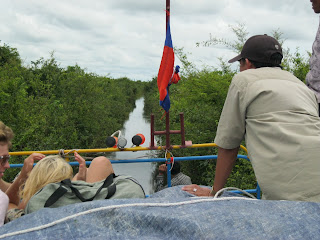 What started as an adventure has now become a hellish ordeal. There seems to be no end either. I put on my hat, my sunglasses and then wrap my sarong around my crouching body and prepare for the next onslaught of branches, vines and bugs.

When at last we emerge out of the jungle and back on to something that resembles a river, I turn my attention to the insects.

It goes without saying that everyone on the roof is itching. There’s also a strange social protocol that complicates things. If you see a strange creepy crawly climbing up someone’s back do you:

a) slap/flick/brush it off without a word, hoping they’ll understand

c) none of these; keep quiet and watch as the offending insect makes its way up their back or along their sleeve.

The next two hour sees the roof people industriously removing bugs from their person and belongings, and dabbing at wounds with tissues and Savlon. I feel like I have been to war. The hangover, the lack of sleep, the man vs nature battle has left me a wreck. The sun is still blazing, the boat is still going, but I am broken. I lie back, let another layer of skin burn, and watch glass-eyed as the bugs crawl all over me, hoping that this is the lesson that sticks – golden rules should be honoured at all costs.