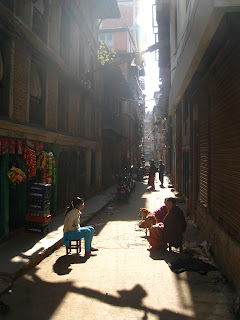 It was December and the sun was burning brightly above Kathmandu; dappling, illuminating, and stretching shadowy figures along dusty alleyways. It was warm in the sunlight too, you could tell from the relaxed faces of the women selling fruit from the roadside, faces golden and serene.
At the cafe next to the Indian Embassy Gate, the man bought a single cigarette from the counter and fell in love for the third time that day. She was eating a sandwich, picking it apart before nibbling seductively at a piece of cucumber or a crust. The cigarette seemed to smoke itself as he watched her perform her culinary autopsy, precise and perfect. He smelt the filter burning and let it drop from his fingers.
He wished that he had dreadlocks and that there was a soundsystem playing Peter Tosh so loud you had to concentrate on not shitting yourself with each rumble of bass. But, it occurred to him, if he had dreadlocks and those baggy brown trousers that the hippies wore then he would probably just shit himself anyway. He would have nothing to worry about, he could just lose himself in the music.
If he could become this free spirit, then, when she had finished her sandwich, she would come and dance with him. He would spin his head round and let his dreads whip her all over her body. She would not complain about the smell or mild discomfort, instead she would untie her hair and gyrate wildly too. Their hair would become intertwined. They would laugh, kiss deeply, and walk off together, hair still entangled.
His mobile phone vibrated in his pocket – he was needed back at the office. In a window, he checked that his tie was straight and brushed some ash from the lapel of his M&S suit jacket. He turned and blew a kiss to the sandwich girl. It was more a cough and a downward hand gesture but her boyfriend still gave him a strange look.
He walked down the road, stopping at the gates of the Indian Visa Processing Centre. He popped his head into the compound and looked around admiringly at all the dread-locked hippies in their baggy brown trousers, waiting for their application forms and receipts.
‘You fly free spiritual kin, fly far and free,’ he said quietly, before making the peace sign and ducking back out to the road. The British Embassy was only seventy metres away but felt like a million miles to him. He walked heavy-footed through the door, up the stairs to his office and eventually sat down at his desk. He opened the database he had been working on, turned on the new Coldplay album and started to work through the pile of queries.
After ten minutes, he turned the Coldplay album up loud and, in time with the drums, typed  into Google – ‘growing natty dreads – how long?’ Things were going to be changing around here, that was for sure. 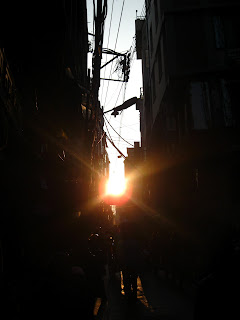 Fear and Loathing in Kathmandu
Hopelessly Devoted in the Himalayas