I have a girl’s bike. It is pink. It has no gears and no suspension but it does have tiny girlish wheels and a small bell that tinkles just so. In Yangshuo county in the south of China, the dirt roads that wind amongst the towering karst mountains and alongside the riverside rice paddies are traversed by brutish Honda motorbikes, gothic tractors spewing thick black fumes as they transport bamboo from village to village, and the occasional resplendent Aryan on a mountain bike, passing by in a flash of blond hair and glistening calf muscles. And then there is me, on my girl’s bike.

I borrowed the bike from a farmer. Perhaps it was his daughters. Perhaps he kept it because it makes him smile.

After watching me trying in vain to push my water bottle into my trouser pocket, he comes over and hands me a length of red ribbon. There is not a hint of mockery in his eyes as he passes it to me but the uncanny colour coordination is no accident. I tie some rudimentary knots, lashing the bottle to the back of the bike before setting off. My first encounter with a rock and the bottle goes skidding dramatically across the gravel. The manliness inherent in knot-tying has no place on this bike. I dust off the bottle, unpick the ribbon and then set about tying it to the centre of the handlebars with a splendid bow. Of course, it stays there, swaying coquettishly, pretty as a picture. 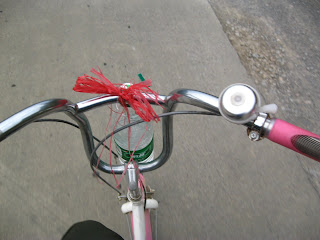 The potholes and jagged stones don’t let up, sending pulses of errant energy through the bike frame into the various contours of my buttocks and testicles. It is an unrelenting pounding that no extremity deserves. I take to sitting side-saddle in a style reminiscent of a Victorian lady on a countryside jolly. It does little to help my image. The local Chinese at the roadside cheer me on. I am a vision of the West, ridiculous and pathetic, and way beyond the imagination of any Maoist propagandist.

When I reach the river-crossing, sore and exhausted, I carry my bike outstretched like an offering onto the waiting bamboo raft. I lay it down with a reverence it does not deserve and like a Viking funeral for my manhood, the bike and I float out onto the river. 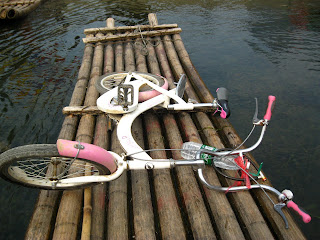 Successfully over the river and on the outskirts of some village, I hear a bicycle approaching from behind that wheezes and creaks just like mine. Soon an old battered bike draws level and an old battered rider offers me a toothless grin. This wizened man is not mocking me; his smile is an acknowledgement that we have both pulled the short straws in the cycling stakes. We are brothers, across cultures, across generations, brothers holding the same shitty end of the stick. But then he flashes me an even wider grin and with a few pumps of his arthritic legs, he leaps off into the distance. Brothers no more. It is at this moment that I see the dead dog he has tied to the back of his bike, its limp lifeless form, a kind of bumper. God speed to you both, I shout into the lingering dust crowd which is all that remains of this two-wheeled hearse.

I am in China, surrounded by beauty, on a girl’s bike – I will shout and whoop and smile some more.

Read more from my Chinese travel blog – a train ride in Guilin or a few days exploring Gulangyu.