India is like having an American girlfriend, one of those blonde, fake-breasted high school cheerleading stereotypes, who happens to have the unfortunate habit of turning into a 48-year-old alcoholic drug-user at any moment when you really wish she wouldn’t.

Your girlfriend has a loud voice with a variety of pitches, each one equally irritating. It’s the kind of voice that demands attention.
When you are trying to concentrate on something, she will ask if you like the red dress or the black dress better, then she lists every other colour, garment, and conceivable setting. Not once does she listen to your replies, if you even bother to offer one. She is like this with everything. If there is not a dilemma, she will simply babble incessantly. She wakes you at four in the morning just because she can.
But sometimes she is silent and it is magical.
She can be beautiful too. If you catch her sleeping or daydreaming or just sitting still when she thinks no one is looking, her beauty is serene. The peroxide hair and fake boobs are revealed for what they are – a smokescreen, a prestige, a shield to protect and distract from something so pure and fragile it has no place in this world.
Then, she does it. She flips out, shapeshifts, and you realise the girl that you had briefly fallen for is now a complete mess, jawline flecked with stubble and vomit. She would reek of stale alcohol if the smell of shit, piss and general decay emanating from them wasn’t so strong.
A cigarette that was moments ago being smoked languidly, now burns through plastic in an ashtray next to the bed you are in, which is now, you see, crawling with lice, cockroaches and the blood punctuation marks of bed bugs. You feel dirty and all you want is the beauty to return and sleep to come. It doesn’t. She is talking, nagging, swearing, grunting in your ear so loud that not even headphones block it out. The voice is inhuman, tearing at your inner-ear like sandpaper.
She needs money, is desperate for it. She has problems you can’t even begin to fathom and the tears come. And even though she is ugly, you want to help. Nobody deserves to be in a state like this. But you know deep down that the money won’t help, that this problem can’t be fixed by you alone. You lie there, sick in your heart, with the smell of faeces in your nostrils and listen to her scream at you. In a way, you feel like you deserve it or at least have no right in wanting it to stop.
The next day you open your eyes and next to you is her, returned. Her face is bathed in orange-red sunlight, the brown roots in her hair are visible through the blonde, she is wearing no make-up and she is smiling slightly, happy in a dream. You kiss her and she wakes. She pulls you close absent-mindedly, saying nothing, but somehow filling you with a simmering, near bubbling, joy.
Outside in the streets, she shouts at you, prods you but today, it makes sense. She makes you smile, laugh, and you talk back, shout occasionally so she can hear. She trips you up, pushes you, slaps you but it’s not painful, it’s endearing, it’s fun, it’s being alive. You argue over insignificant things but it is all part of the theatre, it is not anger venting but the lines of a starring role you were born to play.
Sometime later you imagine that you will make love to her. It will be gentle, tender, meaningful and leave you exhausted but fulfilled right down in the pit of your stomach. Then it occurs to you, with a slow-falling dread, that it won’t be her but her and it will be brutal, painful, sad, and leave you feeling empty. You know that you will still walk back to that room, that bed, it’s just the way it goes when you date an American girlfriend, one of those blonde, fake-breasted high school cheerleading stereotypes, who just happens to have the unfortunate habit of turning into a 48-year-old alcoholic drug-user at any moment when you really wish she wouldn’t. 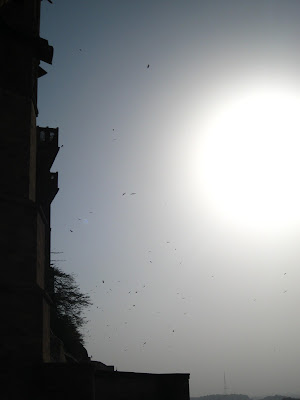 Shirt-Shopping in Amritsar
India in Snapshots