I am sitting on the broad steps of a temple in Kathmandu’s Durbar Square and I am reading a book. The warm glow of the sun has turned the pages to butter, the words to ants, to barcodes. Hawkers and tourists stream around me but I hardly notice because I am deep within a bubble of contentedness.

After several days in Kathmandu, I no longer feel obliged to do anything. I have seen and experienced interesting places, chatted to interesting people, got lost down interesting side alleys and found my head too close to interesting body parts on public buses. My only remit now is to seek out bubbles and float in them, admiring my own private smugness, smudged out in petrol rainbows on the bubble-film.

I found a bubble in an eatery off Patan Durbar Square around a steaming plate of buffalo momo. It remains long after I tuck into a second plate. 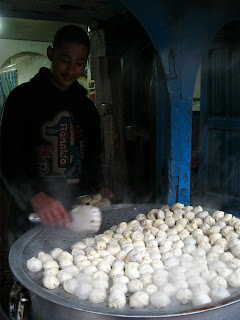 A young woman, perhaps seventeen, sits round the corner from where I sit and read. She is gossiping with an older woman and a gaggle of younger girls. The jewellery she sells sits sparkling in her lap. She turns to me and asks my name and my country – the standard first line in a Nepali sales pitch.

I reply lazily, consciously removing any trace of interest from my voice and only just allowing the words to escape the bubble. She can tell. “I’m not trying to sell you anything,” – she offers the standard second line of a Nepali sales pitch, lazily.

I found a bubble bowling pseudo-spin at a plastic water bottle wicket and watching as a flash of cricket bat dispatches each ball far over my head and into the temple garden.

Young girls flock to this woman; sit at her feet, play with her hair, stroke her arms, do anything just to spend time in her presence. These girls sell bangles and make henna tattoos for the tourists. Some of them live on the streets, all of them are out on the Square every day, all of them love her.

She starts to talk to me again and this time I let the bubble burst. She is interested in what I say and is funny, and she never once mentions the jewellery that she tweaks busily in her fingers. After a while, a girl interrupts us, laying a badminton set before us.

I found a bubble in a café, drinking coffee and sharing music with three engineering students who allowed me to wash my dirty feet in their bedroom. My feet were dirty from playing barefoot cricket with them on a patch of grass also used for driving lessons. 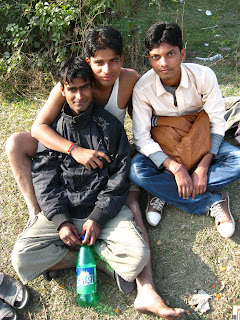 In a makeshift court between two ancient temples, we play, sending the shuttlecock high into the blue Kathmandu sky. The people relaxing on the temple steps start to watch, allowing their eyes to follow the arc of the shuttlecock. There are barely audible noises that escape from their lips as one of us jumps or dramatically lunges.

The shuttlecock soon splits and a girl is given some money to go and buy another. She refuses to take my money. Moments later, the girl returns with a shuttlecock and the game resumes. Many of the girls are watching now, jumping from foot to foot excitedly. Someone else is drawn to the snap and hiss of the game, a burly soldier with a gun. He shouts at us to stop playing.

Despite him having a gun, all we do is smile apologetically and sneak to the far side of the temple. Reckless; alive. A winner-stays-on contest commences with frantic, unbridled energy. The competition is fierce, full of delighted shrieks. A constant line of fresh players wait for a turn.

I found a bubble in a Muslim restaurant where the old men would stare as I ate aloo gobi and flat bread; little did they know that I feasted on their bemused gazes as much as the delicious curry.

An old lady, wise and wizened, rests in a scrunched heap at the foot of the wall, a gargoyle of a ballgirl. She stares continuously ahead, her gaze indicating the line of the net. When a shuttlecock lands in her lap or the nook between her head and shoulder, she does not blink; not even when someone steps forward to prise it loose and return it to play. 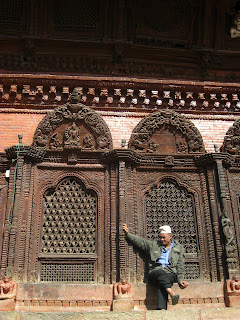 Occasionally, the shuttlecock sails over the low wall and into the stream of traders, touts, and tourists that rages beyond – a situation that sparks urgency in everyone. Street kids dart out from various vantage points, manoeuvre worm-like between legs and snatch up the shuttlecock, holding it high in victory.

I found a bubble in a cheap hotel room with a writing desk where I write and listen to music loudly and don’t even care that it is sunny outside.

I lose several happy hours in this way and could have lost several more if it were not for the soldier. Alerted by the growing and somewhat vociferous crowd, the soldier has re-merged, this time with the gun pressed to his chest and his cheeks glowing scarlet. He starts to shout and move towards us, quickly. As a 6ft 3” white guy amongst a hoard of excitable screaming kids, I am conspicuous. The racquet in my hand is a beacon of my guilt, a symbol of my blatant disregard for his most blatant authority. I decide that it is time to find a new bubble. I run to find it. 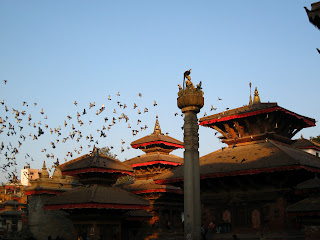