In the sun, with a jagged peak emerging high above the horizon, the two of them flow together, undisturbed and liquid. The daughter brushes her mother’s long black hair which tumbles then shimmers like silk, tumbles then shimmers. There is something eerie, ghostly about their silent symbiosis, these apparitions on the ridge path out of Bandipur. I smile and nod as I pass them but their mouths and eyes are already smiling, vacantly, unchanging.

I continue along the track, scrambling down steep rocky passages before climbing once again. Occasionally, trees rise up and shield me from the brilliant glare of the sun. An hour passes and I have seen no-one, no evidence of civilisation just the Himalayan hills repeating into the fuzz. 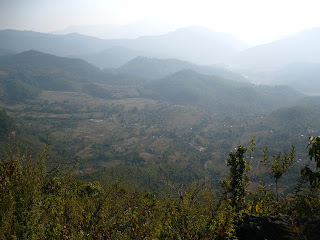 The trees grow taller, the hillside above me steeper, and the path snakes more often. I get the sense that I am being followed: hearing shadows of alien footsteps on the off-beat of my tramp; seeing dappled shapes for slender segments of a second. If this was a fantasy film, an impish creature would be ducking behind a rock or pressing itself against a tree every time the crunch of my boots ceases, seen only by the camera, never by me. It is not, however, a fantasy film; there is no imp but still the unease is there and very real. 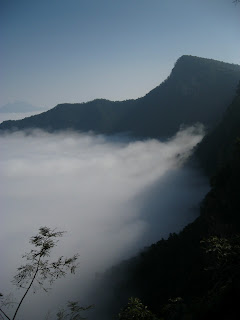 A steady stream of water bisects the path ahead, a twinkling eel, sunbathing. It trickles from a clay pipe that protrudes from the hillside, puncturing the scrub. I follow the flow of water from the hillside, across the path, and down to the trees that line the rocky ravine. Looking at the trees, I suddenly become aware of movement, that the trees are in fact swaying, violently. There is no breeze, nothing to explain the endless parting, bowing, rustling. Then, as if focusing for the first time, my eyes pick out the muscular hunch of a monkey at the crux of a tree fifty metre from me. There are more: five, ten, fifteen monkeys. Each one heading towards me, quickly.

I spin around and thrust my arms into the undergrowth and feel around desperately for a stick thick enough to defend myself, to keep them away from my face. My fists rip and emerge again and again with leaves and fresh crimson oozes but no stick. I am scared. If they are on the attack, then they will hurt me. They seem very much on the attack. 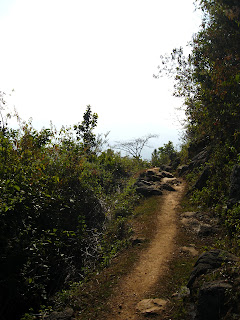 Just as the first monkey, the alpha-male, is about to swing onto the path and tear me into bite-size hunks, a cacophony of screeches and whoops emerges from behind me, followed almost instantly by a barrage of rocks that crash into the trees with considerable force. The monkeys roar as the rocks smash into the branches around them. They start to retreat and I start to breathe.

I focus on slowing my heart which beats in my head in one giant pulse. When I can distinguish between beats, I turn around. Standing in the centre of the path with the same smile is the girl; her mother to her right in the shadows. Although cloaked in shade, I can feel the mother’s smile, vacant, serene. I look at my feet in a tangle of shock and shame, trying to order my brain enough to thank them in Nepali but it is scrambled by panic. When I look up, they have disappeared. The single path is narrow, the drop sheer, and the hill precipitous. But they are gone and so, thankfully, are the monkeys. 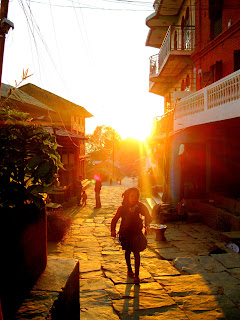 Hopelessly Devoted in the Himalayas