Kumari
She is a Living Goddess, plucked from the innocence of childhood and placed amongst goats heads, severed and spurting. Thrust before the faithful and the faithless, worshipped, revered, in thick eye make-up she stares at the twisted world, beyond confused. She is Kumari Che.

The pigeons roost in the corners, and slow-drip shit into the intricate carvings of the Kumari Ghar, her holy abode. Occasionally, they flap wildly in the small courtyard, mocking the tourists that shuffle below in anticipation of seeing the child-God, the freak, the savour. A still settles when she appears in the afternoon, emerging from a small balcony at around 4:30pm. 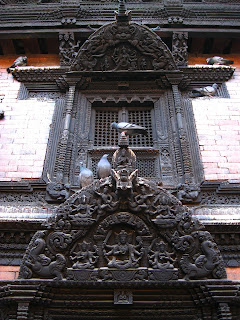 She chews gum disdainfully, looking down at the crowds with a stare of utter boredom. She waits for thirty seconds, offering that same couldn’t-give-a-shit look, then slowly, silently she retreats back inside. No miracles, no words, no wave, no gesture: just a six year old Living Goddess doing what she must.

Thamel at Night
Kathmandu winds down early, not just for a capital city, for anywhere. The streets are dark and near deserted at 10:30pm, but a few remain…

Three men huddle around a fire near a stupa; two cows nose around in a pile of rubbish; stray dogs chase each other; a child, who has been sniffing glue, signs that he wants food to two tourists walking home from a bar; security guards with metre-long wooden rods tap at the ground outside tourist hotels. At the main crossroads, police stand around menacingly with large old guns, glaring at shadows. A CD shop, somewhere, remains open, blaring out Buddhist meditation music, sound-tracking the somehow seductive scene.

Christmas Chorus, Bandipur
My room looks like it is made of red clay. There are no wall-hangings, nothing that could be called an adornment; there is a window, but no glass, just a wooden shutter twisted with age. The bed is made from straw and the blanket is damp and impossibly heavy. It is basic but mine. The owners heat water on a large wood fire for me so that I can wash myself by tipping steaming buckets over myself while hunched over the squat toilet.

I watch, as I do every night, the sun set over the Himalayan hills through my window. It is a gamble because as soon as the sun disappears, the cold rushes in to my room, fills it, settling in for the night. As I watch the yellow-red outline of the mountains fade to black, I can hear, in the distance, children singing, a swell of little voices and a few chords strummed on a guitar carried in the breeze. It calls to me, I can’t ignore it. I dress and head out into the dark, the cold and towards the chorus.

Down the hill, I head, away from the village. It is not long before I find them, a group of children and adults huddled around candles singing Christmas songs in Nepalese. It is the most festive thing I have ever experienced. I sit on a stone step and listen in, letting it warm me. Christmas is five days away. 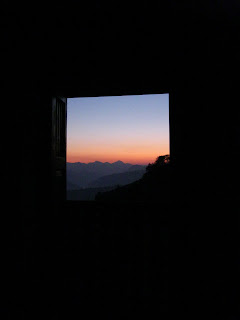 The old man has goods for the market. The market is seven miles down the mountain. He is shrivelled and withered with age, walnut and tree roots, tea-stained and sinewy this miniature man with a heavy load. He drags his wares and his weariness up onto the minibus and down the aisle to a seat. When he collapses, he does so without ever suggesting that he is collapsing. When the young, cock-sure driver demands two fares, one for the old man and one for his wares, he does not have it. Neither does he show that he wants to cry or punch or both. He just gets up, drags himself and his wares out of the minibus, and starts down the mountain. A parable has died. 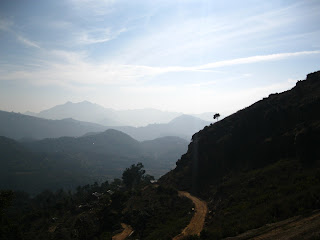 Dream A Little Dream
It came to him in a dream, tumbling from his sub-conscious like a rock kicked along a road by a petulant child. He would move to Kathmandu, marry a plump woman, and learn to make Gorkha knives.

He would hire a hut by the bus station and butcher buffaloes amongst the flies and exhaust fumes. His knife would flash in the sunlight, the delicate detailing glowing in the hilt, the glory of his workmanship bright in contrast to the dull brown blades of the locals.

The locals would call him names, not always unfriendly. And his days would be filled with a thousand miniature victories. More than enough, more than enough.


Streets of Rage
There are three street kids kicking a metal scourer in the shadow of two ancient temples. Their little limbs are flexible, high-kicking and skiddy. I join the game – the comedy of my elongated limbs, my general ridiculousness, currency enough. The scourer stays in the air: once, twice, three times around, each of us sending it arcing in the dusk to meet another stretched limb or protruding knee.

But just as satisfaction paints our faces bright out come the ‘others’, the wild street kids. They flail limbs in such spastic, swirling ways that the scourer instantly becomes insignificant. Soon, they begin to karate kick each other, head-high kicks that land on shoulders, necks, chins and occasionally heads.

The original trio snatch up their scourer and scuttle off to calmer pastures. It is at this moment that the  fighting breaks out, expands like a Bruce Lee sequence. More miniature henchman appear, back-flipping off temple steps, somersaulting out of shadows to join the action.

The noise is deafening, the energy terrifying, a blur of movement pricked by wild eyes, bright like beacons in the gloom. I feel like Roger Moore’s Bond, with a face simultaneously revealing alarm, hopeless bemusement, and delight. I walk away slowly, smiling, as more blows land, as more dust flies up, and  more cartoon letters BIFF, POW, BOOM, WALLOP are coughed out into the Kathmandu night. 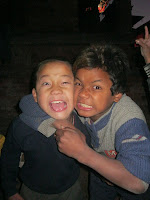 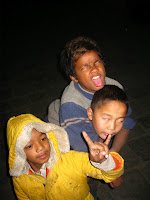 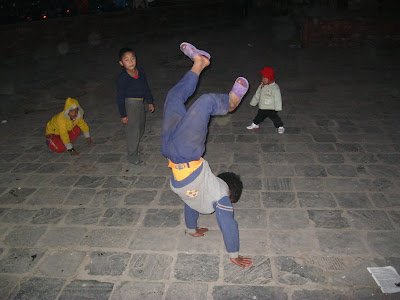 They glow pink, blushing at their own greatness so glaringly obvious on the horizon.

They aim steaming arcs of piss at the lake, smiling with each splash.

They defile the wives of the tree-topped hills so meek in the valley, such unthinkable acts.

They stay up all night under the cloak of darkness and bitch about lesser mountain ranges, inventing derogatory nicknames for them.

This is what the Himalayas do. 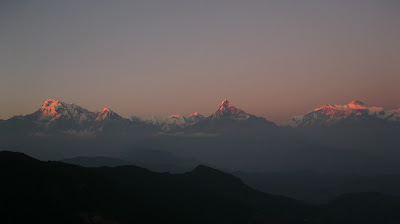 Screeches and Stones: A Stroll in Bandipur

Rebel Badminton and Other Bubbles