I refuse to pay £12 a night for a room in India. It sounds ridiculous but it would be nearly twice the highest amount I’ve paid since arriving and I am a tight-arse. I am fully aware that at £12, the room I am in is by far the cheapest room available in the well-lit, clean, and ultimately pleasant Sector 21 of Punjab’s capital, Chandigarh. I also know that there is no chance in hell that I will pay it.

A cycle rickshaw man carefully watches my progress from the darkness pooled at the base of a tree. He has seen me lug my heavy bag in and out of these distinctly average and comparatively pricey hotels. Eventually, seeing me double back after exhausting every hotel and looking more that a little dejected, he seizes the opportunity to lay out his offer. He knows a ‘much cheap hotel, so very nice’ that is only one kilometre away. He will charge me just 10 rupees to take me there.

I know that he will get commission from the hotel. Judging by the fact he is only charging 10 rupees for the fare, it will be a decent cut too. I also know that it will not be one kilometre away, it will be at least five. I also know that I will go with him because I am a tight-arse on a budget and no matter how much nicer and easier it would be to spend the extra few pounds and stay in this pleasant area, it will feel like a failure. I also know that the hotel will not be ‘so very nice’, it will be a doss house for drug addicts and sex workers. I chuck my rucksack on to the back of his rickshaw and watch as his legs pump me slowly away from civilisation.

As if it was his sole purpose to give me a tour of the darkest, dustiest, most threatening area of the city, he turns and turns again into streets entirely devoid of life. He pedals on for 5, 10, 15 minutes. As expected, the hotel is not 1 kilometre away – we have travelled six kilometres now. Some figures gather around a fire in a roadside slum. It is the only light I have seen in ten minutes and my eyes struggle to focus on their shifting forms.

Another 10 minutes pass and there are suddenly lights everywhere. Big, bright strips illuminating garages where men work busily and noisily on cars, bulbs bathing a newspaper dump in warm orange as a continuous procession of cycle rickshaw drivers deposit great piles of papers . My hotel is near here, just off the attractively but wholly accurately named tyre-market. It is the antithesis of a tourist area. I am sleeping in the set of Too Fast Too Furious.

The hotel room is not terrible. Admittedly, there are great rips in the patterned bed sheet. A patterned bed-sheet instantly disconcerting as the patterns hide the semen stains all too obvious on white sheets. The toilet is a flooded cupboard of taps, pipes, and drains all leaking rusty brown water. The walls are thin. It is noisy. Very noisy. It is £6 a night, worth much less, and of course I take it.

As I’m paying the man at the desk, I catch a glimpse of another room where a tubby man with maniacal eyes is sat up in bed in a stained vest top. A younger man has just entered the room, bringing with him a big bag of blackened bananas. It is odd, very odd, and reminds me of Willard meeting Kurtz in Apocalypse Now. I retreat hastily into my room and lock the door. I roll out my sleeping bag liner so I don’t have to touch flesh to filth, and try to sleep. I am an idiot. But I am an idiot who is £6 richer. 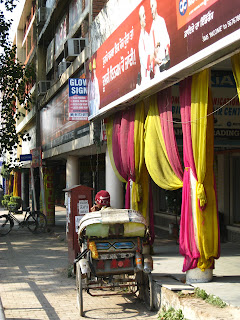