There are a lot of children in Cambodia. 40% of the population is under 15 years old. For many reasons this is exciting: youth brings energy, hope, and the potential to move on from a past however bleak it may be. Sadly though, it does not always feel like this. Due to this blighted past, it also means that these children include many orphans, those disabled by landmines, homeless, living in abject poverty or more often than not a sorry combination of all of these.

Siam Reap is teeming with street kids. They sell postcards, bracelets and pirated books about Pol Pot. They drag around hessian sacks pleading with wide, tired eyes for empty water bottles. Most of these kids are exceptionally smart – they can speak several languages, engage in witty conversation in all of them, and even name every capital city in the world. It’s their job to charm you and then ask for money for what they are selling – they do not beg directly. They don’t seem like children.

The money they make does not go to them, nor, in most cases, to their families. They don’t go to school. 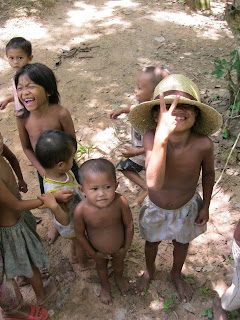 Late at night, these kids are still out on the streets. They dance with drunk Westerners outside the nightclubs on Bar Street; simultaneously children and adults. They perform backflips to Rihanna, for money, for fun.

One morning in an alley behind Pub Street, I am eating breakfast. It is a large breakfast and it tastes good. A man with no legs hobbles by on crutches, dragging behind him a strange homemade machine for the tourists. My coffee is surprisingly strong. Small groups of homeless children make their way from table to table: “What is your name? What country are you from?”

I am pleasantly surprised when the waitress brings out a course of fresh fruit. Tiny children scrabble in the gutters, looking for anything, finding nothing. The whole area is alive with this awful contrast: I embody it. Western tourists indulging themselves: mine-victims and street kids doing what they have to do to survive.

Then something magical happens. In the restaurant opposite, a television above the counter flickers to life. The bright images of Tom and Jerry appear through the static. Within three minutes, the sad energy and bustle of the alleyway dissipates; a Cartoon Network-inspired entropy.

Every child in the vicinity stops what they are doing, abandoning their wares, and makes their way towards the wall that runs alongside the restaurant. Twenty or so children are now sitting in the alley staring, transfixed at the television, and laughing. The 11-year-old boy with one leg who sells paintings day and night props himself against the wall to enjoy the show. The smiles that break out on their faces are incredible, near-religious – these are children after all and it is so painful to be reminded of that. 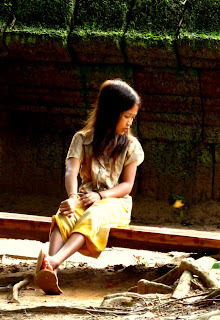 Read about Justin Bieber in the Bodge.