Welsh-born artist Pete Fowler created Monsterism Island and its bizarre inhabitants in an ambitious multi-faceted art project. The Psychedelic Guide… is the latest in a series of compilations to provide musical accompaniment to this strange land.

Fowler’s art, typified by bold colours and an accessible surrealism, is playfully odd and satisfyingly kitsch. On this album, he pulls off the musical equivalent. New compositions taking in elements of Krautrock, traditional folk, acid country and twisted electronica are jammed out in a heady instrumental broth.

A tendency towards musical whimsy and the odd flirtation with tweeness in the introductory section of the mix makes for a slightly uneasy transition into the Monsterism world; however, the introspective and darker tones of the middle section are a huge success. Seven Thousand Pound Bee, Cherrystones’ fidgety exploration of broken beat, sounds simultaneously hyper-modern and ethereal. The highlight comes from the excellently named Dud Thud’s Lonely Library, a superlative example of tech minimalism and eerie found-sound hum.

A Psychedelic Guide To Monsterism Island takes the listener on a defiantly non-linear musical journey. It delights in tangential themes and sub-genre experimentation; concerned principally with texture and mood over a strong narrative drive. Yet the intrepidness of the musical endeavours and the expert programming create a cohesive and ultimately successful album. 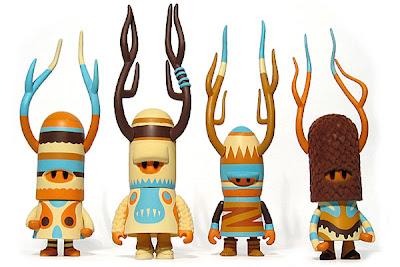