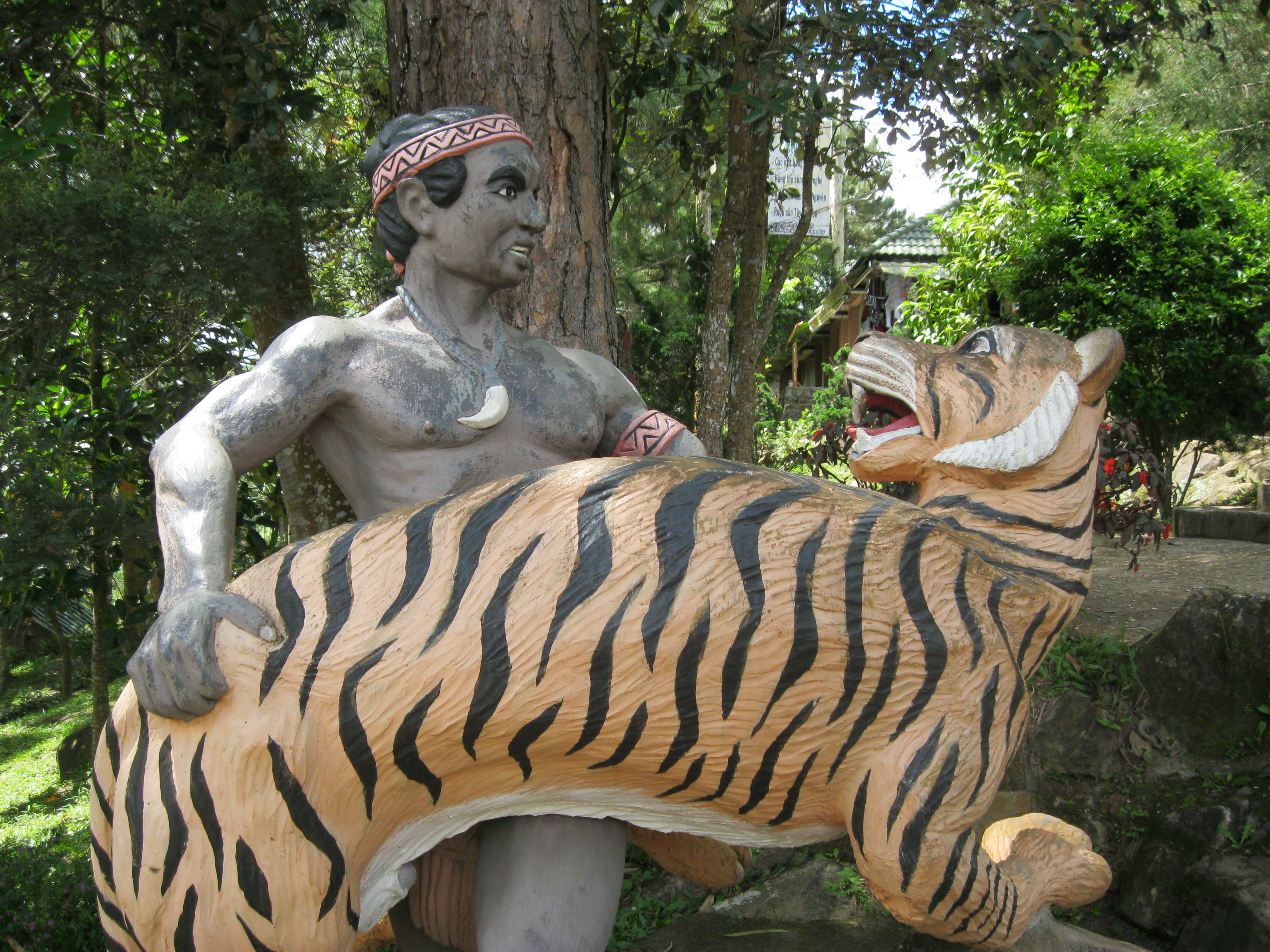 When passing through a country for a month or two, it is impossible to grasp the nuances of the culture. You don’t even scratch the surface. Your eyes and senses see what they recognise and refract it through a prism of familiarity. It is important to realise this and to know that you are on your own trip, seeing through the language of your own existence. You don’t know the whole story. You don’t know how things fit together. Some things you can guess at: recognise the prime mover, the process, the need. Others are far beyond you.

Here follows an example of what I mean. I was walking up through the suburbs of Dalat in Vietnam on a sunny afternoon, killing time, searching for kicks. I did not expect to find amongst white houses and drying shrimps a ‘cowboy and Indian’ park but that is what I found.

At the top of a steep winding road, I spotted a small gate. I wandered through it and down into the Valley of Love park, glad of the little pockets of shade it promised. The park was completely empty but for several large fibreglass models of Native American Indians and various animals that were dotted around the park.

Although deserted, there was evidence that at some point the park was far from empty. There were shops sealed in huts, empty seats over-looking an elaborate system of pipes. There were even two living-breathing ponies, painted to look like zebras, braying near a large elephant. But there were no people.

I like abandoned places, especially theme parks. I love how in their conception, fun is carefully constructed in bright shiny hues, bold strokes, the architecture of optimism. Then, over time, it inevitably fades. Paint peels, metal rusts, people go elsewhere. What are you left with? That sense of engineered fun gone wrong, dead laughter and rust, empty entertainment. A strange husk of joy, the faded decaying dream. The fibreglass figures – the animals and men –  seemed angry at the emptiness. At being alone in this place. They were a swing in an empty field rocking back and forth, a Ferris wheel not turning, a see-saw neither seeing or sawing.

As much as I love deserted theme parks, I love bad animal caricatures more. This place was for me but how it fitted in with Dalat, with Vietnam, with the world was beyond me. Why were there huts where, when open, you could buy cowboy hats?  Why were there ponies painted like Zebras tied to trees? Why were there elephants and Native Americans together? This was some Jumangi shit, right here. Why did this place exist? And where was everybody? Anybody? The fibreglass statues were crude and eerie. The rabbit, myxomatosised out of his tiny mind, was looking for trouble. There was a fox nearby, its face chewed off. It didn’t take much to put two and two together. The Native American’s teeth were gritted. He was determined to exact revenge on Columbus and every other fucker that had wronged him and his people since. He’d do whatever it took. He’d throw a damn tiger at the bastards who had destroyed his land, eroded his culture, stolen his soul. Who was going to stop him? Who? The park and its inanimate inhabitants made no sense to me. But then again that’s travelling. Travelling is finding a fibreglass rabbit in a deserted park in Vietnam and being more than slightly scared.

Read more about travel in Vietnam and find out why some men can’t leave Hotel California in Saigon.