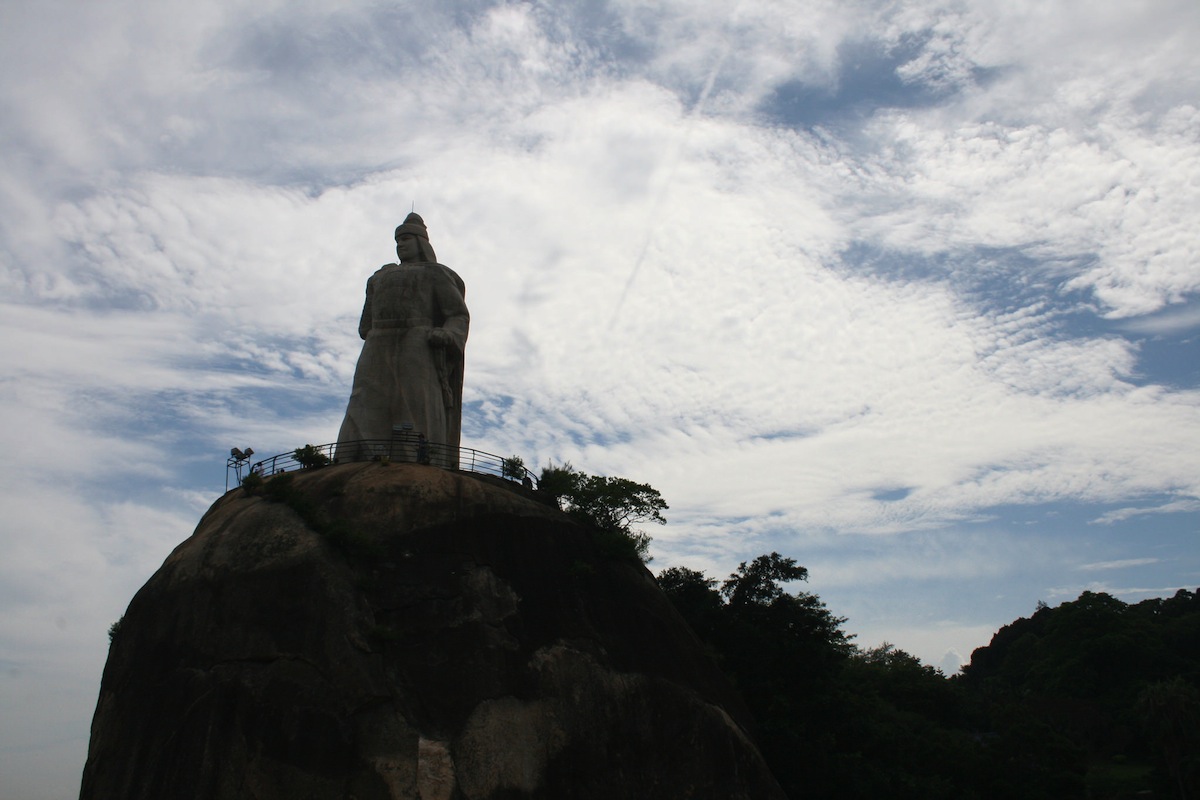 We have been lost on the island of Gulangyu for hours in the dark, humid night.

It did not occur to us that this island would actually be free from all transport.

It was something nice to write in the guidebooks and brochures…

“No cars disturb the tranquillity of this small, unspoilt island…”

Never did we imagine that it would be true.

On Gulangyu, it was painfully true. There wasn’t a car in sight. Not even a wiry old master with a rickshaw resting under a tree or a youth nonchalantly revving a scooter on a street corner.

Laura and I watched as the ferry headed away from the shore. We then looked down at our large backpacks and sighed. It was clear that we were in this on our own.

The only traffic on Gulangyu was foot traffic from the scores of tourists that ambled happily and without care in the vehicle-free streets. For us, with nothing but a hastily scrawled address on a scrap of paper, it had quite the opposite effect. Panic. How would we ever find our hostel without vehicular assistance?

In each of the island’s bustling squares, there were tourist maps. These maps, however, were useless. They were not to scale and would change their orientation entirely depending on where they had been placed. Using them to navigate a warren of dimly lit alleyways to a street too small to be named was always going to be a tough and thankless task.

The island was hilly, which didn’t help. Not just one hill but thousands of them, rising out of nowhere. Each twist and turn revealed yet more precipitous climbs. Gulangyu had seemingly been designed as some final test in a Greek myth or as the Goblin King’s cruellest Labyrinthine revenge.

It was late evening now and the air was thick with humidity and an omnipresent croaking. On another night, the frog chorus and chirruping of insects may have been enchanting. Tonight, it was oppressive, just like the heat, just like the weight of our packs, our tiredness, our irritability – closing us in, pinning us down to the hopelessness of our predicament.

We had walked past the same landmarks so many times that the statues had started to shake their heads in pity as we approached them once again. The illuminated Sunlight Rock at the centre of the island had even commenced tutting appreciably each time we circled it.

Laura and I had climbed steps that lead to yet steeper steps, even walked through tunnels cut into the very heart of the island but still we were none the wiser. The island had turned on us, both literally and figuratively. It seemed like we would never find the bed we so desperately needed. Eventually, with the moon high in the night sky, we found a street sign that matched the one scrawled on our now sweat-sodden scrap of paper. We allowed ourselves a small exhalation of relief, little did we know then that our journey and suffering was far from over.

We walked the length of the street twice without seeing anything that looked remotely like accommodation. It was, it goes without saying, mountainous; summiting somewhere not too far off Everest. The street was dark, deserted and deeply baffling. Building numbers ran out of sequence, jumping by twenty then thirty before inexplicably running in reverse.

Close to passing out with exhaustion and more than a little desperate, we stopped. More accurately, our bodies finally succumbed to the weight of our packs and we collapsed against a wall. I could tell that Laura wanted to cry, but the humidity had even stolen her tears. I busied myself in the attractive process of wringing the sweat from my vest and trying to un-fuse my vertebrae.

We silently appraised our options. Both of us contemplated the prospect of bedding down on the other side of the low wall where we had come to rest. The rat droppings and rubble were not ideal by any means, but at least they were there, tangible.

I decided after a few more heavily-silent minutes to head off by myself and resume the search for our accommodation. I left Laura to further assess the rubble and rat droppings. As I set off down the street again, it occurred to me that I may not be able to find my way back to her. And, of course, there was the very real possibility, that in the time it took me to locate the hostel and get back to her, the island would have spawned yet another hill, raising her up a further 100 feet above sea level.

Around a bend and down a hill I went before turning and heading straight back up the same hill. On my second ascent, I noticed a faint glow of light down the hillside. If it wasn’t our hostel, then perhaps there would be someone who might be able to help.

I headed down the steep path in the pitch black, undeterred but terrified by the howling of a dog that had started up. Every inch of me wanted this to be the place. I needed the ordeal to end.

At the bottom of the path, bathed in light, was a teenage boy reclined on a bench. Could this tin-ribbed apparition be our saviour? It turned out that he was and that this place was indeed the hostel that had for so long eluded us. There was no sign or building number to confirm it, but I now had the boy’s word. I dumped my backpack and as I did so instantly unleashed an involuntary victory dance as my muscles went into spasm.

You would have thought that we had been through enough just finding the place. We hadn’t. Having somehow deeply offended the Gods of the Island – perhaps by praying loudly for motorised vehicles – our ordeal was about to get worse.

There had been a mistake with the booking and the room we had reserved was no longer available. Apparently, we were late. Our estimated arrival time had been a tad over-optimistic admittedly but a booking was still a booking. Not so. We were faced with a quandary. The thought of heading back out into the mountainous mugginess was not an option. We would take anything, we said. The boy made signs that he was wrestling with some moral dilemma before eventually disappearing in order to ready ‘the family room’.

By anything, we hadn’t meant the concrete out-building that he had generously dubbed the ‘family room’. With no bed, in fact no furniture of any description, and no concession whatsoever to comfort, it was a stable minus the horse and straw; a family room for a herd of goats.

There were three Japanese-style mattresses arranged on a rudimentary wooden floor. I say mattresses – I have stopped in hotels with thicker flannels than these insubstantial pieces of foam. I laid on one to test it and was instantly overcome by a wave of pain spreading through my body from where my hip collided with solid ground.

The hostel owners had tried to distract from the inadequate mattresses by covering them with coarse scratchy blankets and some limp stained pillows. The ceiling was a network of thick cobwebs and there were numerous dark holes that appeared to be in frequent use by the island’s wildlife.

The teenager motioned towards an annexed corrugated shed. It appeared that the room had an en suite. A curtainless window stretched its entire length so that every viewing angle was afforded to guests and staff alike: our ablutions and toilet business framed like a panoramic photograph. The toilet was offset with a multi-deck plug socket that hung precariously off the cistern. Thankfully, there were the obligatory plastic sandals, which at least made it easier to negotiate the filthy slick that covered the floor.

Too exhausted to get up and leave, too tired to even complain, we were left entirely deflated. It was, and remains to this day, one of the worst rooms I had ever seen, let alone stayed in.

Having taken on water, Laura had regained her ability to cry. She sat on the hard floor and did just that. These were not tears that wanted for anything; they did not seek sympathy or consoling. She was quite simply and irrevocably broken. I suggested food would help. We had not eaten for hours after all. She slowly shook her head. I made some other suggestions but they did not reach her. She could not explain what was going through her head, but then she didn’t need to. She had been bitch-slapped by circumstance and it had left her broken on the floor of a concrete shed.

Just as I was about to leave and locate some food myself, she spoke:

‘Can you hear that? That dripping’

I could. It was loud.

It was the one thing that she wanted. It was also the one thing that was well within my power to action. Yes, I would stop that irregular incessant and wholly infuriating drip. If Laura were to sit in abject misery, then at least she would do so in silence.

I went outside and investigated. A leaky gutter was channelling water directly onto a tin dustbin. The solution was simple. I asked the teenage boy, or Judas as I had now named him, if I could move the bin so that my girlfriend could strike water torture from her list of woes. The answer was a resolute no.

It was at this moment that I decided to go out and find a beer.