Recession looming. Clocks soon to go back. Winter fast approaching. People too depressed to party? Hell no! Joseph Mount’s Metronomy possess tunes so good that even Gordon Brown would dance his worries away.

Tonight at Start The Bus, Mount tours his critically acclaimed second album, Nights Out, alongside friends and fellow musicians Oscar Cash and Gabriel Stebbing. With considerable aplomb, Devonshire lad Mount has tweaked and fine-tuned the instrumental electro thrust of debut Pip Paine (Pay the £5000 you owe) to accommodate a powerful pop sensibility. Having also produced Let The Spirit, one of the highlights from the latest Roots Manuva album, Mount is clearly operating at the top of his game.

The warped Lynchian credit-crunch stomp of their single, Holiday, opens tonight’s proceedings, prompting the crammed-in crowd at Start the Bus to spasm into life. Soon the three men on stage are striking poses and synchronizing the popping of the lights on their chests. It seems everyone is having fun.

The near-ridiculous pop perfection of Heartbreaker inspires a barely-contained collective grooving before The End of You Too and Radio Ladio finally sees the sunken mosh pit explode in a delirious sweaty tangle. These tracks, characteristic of those on Nights Out, flex and bulge with quality. The techy electro-house touches add depth to the synthesised squelchy funk, inspiring what is an impressively lengthy crowd surf.

It is however two tracks from their debut album that receive the best reception: the incredible melodica-driven Black Eye/Burnt Thumb and the set’s chundering closer You Could Easily Have Me. The new album may be of higher quality, more consistent and accessible, but it is Mount’s knack for a killer tune that impresses, with or without the pop.

Tonight Metronomy prove what a hugely entertaining live band they are. The gimmickry of the chest-lights and the playfulness they exude merely serves to embellish what is extremely clever music. This is not Devonshire bedroom noodling with a London gloss; this is inventive substantial music capable of destroying dance floors. 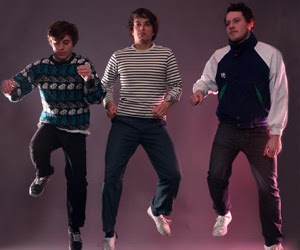