So it is that after a long tiresome day at work, I find myself near trotting up Park Street, turning over a chunky pound coin in my pocket in anticipation of my first 99 pence pint. It doesn’t matter that I will be sat amongst Wetherspoons’ unique mix of odd bods, obnoxious students, and alcoholics as I will be supping on a pint cheaper than a loaf of bread.

As I queue at the bar, a man with long grey hair and an aroma of rotting parsnips stands next to me. The bar staff greet him as Granddad. This man is the head patriarch in the Wetherspoons family – it figures. I take my drink and go and sit in a leather sofa and wait for my girlfriend to join me.

When she arrives, I jump up and buy her a Sailor Jerry’s and Pepsi. Not 99p, but a steal nonetheless at £1.29. For once, I can spend without care. Like a City Boy with a wallet full of fifty pound notes, I’m a tight arse with a tenner in Pov paradise. My girlfriend is amazed to see me so generous, so animated in my spending. We sit down and listen for a few moments to the nauseating rise and fall of voices, echoing around what once was a great building. A theatre, I think. We watch as the shufflers tread a new kind of stage; they’ve been here since 11 am.

After approximately 39 pence worth of IPA, a young man comes and takes a seat at our table, directly opposite my girlfriend. He is in his mid twenties, plainly but well dressed. It strikes me as slightly odd that he chooses to sit at our table when there are a number of other seats available, but this is a pub, and friendly people, or maybe just drunks, do this kind of thing. Then he starts to stare with these big dark dear-like eyes. He stares at me and my girlfriend so much that I start to feel that I may be in a play or part of an art installation. I become hyper self-conscious. I start to deliver these profound, high-falutin’ sentences, choosing and enunciating words as if I were on Newsnight Review. His eyes widen: he is watching us more. I think to myself, act more natural, and make him go away. Then he starts to laugh; a high peel of maniacal laughter. Nothing either of us has said is remotely funny. The table next to ours are in a conversational lull; they have said nothing funny. He is mad.

I steal a look at him and he laughs with such force and conviction that I get my girlfriend to check to see if someone has drawn a cock on my face. I also notice that his pint, probably a 99 pence one, is three quarters full. Maybe this bargain booze isn’t such a good thing, potentially coaxing the loonies from out of their cellars. We have too many bags, cardigans, coats, and drinks to move away without provoking him. With the taste of affordable booze on my lips, I really don’t want to leave. So we just sit and say less, and he just sits, stares, and laughs more. If I were mad, I would probably find it funny that I could just wander over and sit at a table and make people feel really uncomfortable and then stay, and stay, and wait until they crack. I’m sure I’d think it all a bloody good joke.

I get up and order another round, hoping to God that Madhead doesn’t murder my girlfriend while I’m away or order another drink. At the bar, I am distracted momentarily from my worries by the Curry Club menu that swims amongst the booze juice there. £13.50 for two curries with rice, Bombay potatoes, two naan breads, four poppadums, two onion bhajis, two vegetable samosas and because it’s Wetherspoons, two pints of slightly-off tasting booze. The charm of the charmless is upon me. Tonight, my love, we shall feast like kings and queens in this castle of modern Britain.

When I return to the table, there is a hysterical energy in the air – my girlfriend is laughing, the group on the next table are laughing uncontrollably and of course Madhead in the middle is laughing. Whenever the laughter dies, and composure is gained, he looks around at each of us in turn before letting rip his distinctive chortle. Everybody is laughing again, for no reason but for the infectiousness of insanity. Perhaps, 99 pence pints aren’t the way forward. Maybe I would prefer to spend three pounds and never laugh again. Wetherspoons, in a single move, has destroyed logic, turned the world on its head. 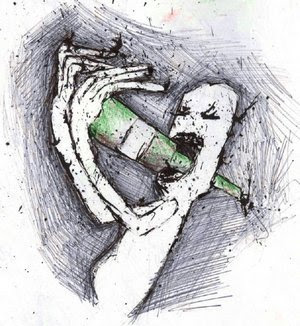