I am in Debenhams kicking around the various clothes gathered in crumpled piles beneath the sale rails. People are feverishly glancing over the sizes of the garments then at the prices, and if either fails to satisfy then they are unceremoniously flung to the floor. In a recession there is no time to re-hang XXL Ben Sherman shirts.

So here I am, amongst my fellow credit-crunched brethren, watching them, knowing all too well that lust for a bargain, but I feel nothing. I do not feel a part of this moment; this desperation born out of a dramatic economic down turn. It may be because I have lived my twenty-five years on this planet as if in a grip of a recession. I have been driven by the principle that if it isn’t cheap then I ain’t getting it. Consequently, I have spent the majority of my money and time rooting around in charity shops. I wear shirts that were never in fashion, cost two pounds, and have out lasted all of my girlfriends. My whole miserable life is a credit crunch. But now, I’m supposed to be sharing it with a population. It just doesn’t rub.

Anyway, a voice is crackling over the tannoy in Debenhams announcing that there is a free give away in five minutes time in the homeware department. I don’t hear exactly what it is that is being given away free, but I am in the lift on my way regardless. There are others with me, heading in the same direction, looking for the freebies. Vultures without a corpse, we complete aimless laps of the dining sets and floral bedspreads. Then somebody spots it; a display table out of place amongst the chopping boards. We gather in a rigid semi-circle around the table and wait. Some people pretend they aren’t waiting, simply resting awhile, feeling ashamed to be so hungry for the giveaway.

Although I am standing here, I still don’t feel any connection to this collective hunger. In truth, I have always been hungry. I’ve been known to walk miles for a freebie. As a teenager I even ate a packet of natural laxatives because they were given away as free samples. My only profit on it was the joy of being glued to the toilet for five uncomfortable hours. I have been here before a million times. You others, emerged from the wood-work, are impostors.

The semi-circle widens, thickens, before a small man in his early sixties wearing a neat navy blue apron emerges, carrying a white plastic gadget. For the next eight minutes, the crowd watch without thought as he demonstrates the Euro Pro Multi Chopper. He cuts onions, potatoes, carrots, cabbages and cucumber into various different shapes and sizes. There is a sadness about this man, about this whole wretched situation.

He is not the best salesman, far from it in fact, but I sense that he is a good man somehow lumbered with this unfortunate job. Everyone is watching him, feeding on his mistakes and his bumbling, slightly pointless anecdotes. Why we need to know that his mate Kev uses the Euro Pro Chef Scissors to cut carpet is beyond me. Halfway through demonstrating “just how easy it can be to prepare coleslaw,” he forgets one of the ingredients. Like a stuck record, he repeats the words, “Onion and carrot” over and over; long enough for us to wonder if he will ever say anything else again. As a group, we have collectively decided that we will only allow ourselves to mentally engage with his awkwardness. We have concluded that no matter how cheap, we do not need or want this device. All marketing speak and persuasive patter is wasted on us. All we care about is the free gift.

Then the demonstration comes to an end; his last desperate pitch falling on dead ears. He stoops down and removes a box containing three hundred flimsy stainless steel potato peelers. The crowd breaks apart and descends upon him, shoving flabby hands into his face without a single word. It suddenly strikes me as so very sad. The salesman, that tragic figure of American literature is here on the third floor of Debenhams. Our very own Willie Loman is in front of me, laying his tragic flaws bare. Thankfully, I recover my senses in time to barge through the remaining crowd and grab a potato peeler. Then I push my girlfriend in his direction to get a second peeler; for a gift, or a spare, it doesn’t matter – this is a recession after all. 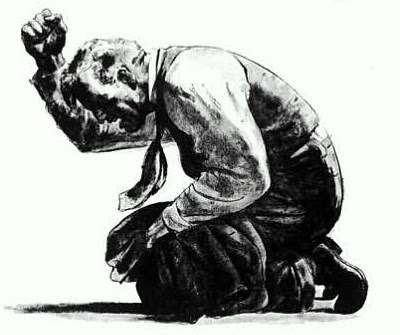