avalide recall can you buy avalide without a prescription avalide generic equivalent where to buy avalide online buy generic avalide avalide manufacturer avalide tablet online where can i get avalide
So, here I am in Sri Lanka, in Colombo, sat in the bursting corridor of light that is the Katunayake International Airport, a veritable Hadron Collider minus the God particle. I have six more hours until I fly back to London after seven months of Asian adventure. I am exhausted. Not just in a ‘I’ve not slept for a week’ kind of way either: exhausted as in I have had to haggle for every meal, rickshaw ride, dirty hotel bed for the past 6 weeks. And before that, move beds every 3 or 4 days, learning to navigate around new cities, languages, transport systems, and failing in all sorts of demeaning draining ways.
Did I mention that I smell. The air-conditioned sheen that glistens around me encourages my musk to come forth like a juicy bone to a hairy, damp, slobber-chopped dog. To exaggerate my discomfort, I have just been disturbed from my shameless tramp curl across three seats by a troupe of stunningly attractive dancers-cum-models-cum-Sri Lankan angels. I sit and type this next to them, hoping that my smell does not reach their beautiful nostrils.
There is nothing to do here: no free wi-fi, no ‘relax’ or ‘sleep’ zones, no shops, no children’s play-areas, no plasma tvs with ads, just this tunnel of anti-sleep, insomnia’s 10 inch shaft slapping me around my face repeatedly. Don’t they know that I have Delhi in me? Its scent in my clothes, its unique deep-seated grime in my pores. Its pollution, poverty, noise, general unabashed chaos in my eyes, ears, and nose. I need a shower and a padded room with fluffy toys and a sweet lady to sing me lullabies until I fall into a deep sleep for at least three days.
Today was not the easiest day either. I left myself the frankly terrifying task of purchasing gifts for all of my family and friends in six hours in a city where people bargain hard, desperate to drag every rupee from your pocket like vultures craning their beaks to tear flesh from inside a ribcage. You have no idea how much anything costs, only presuming that it is around a third of what they tell you. 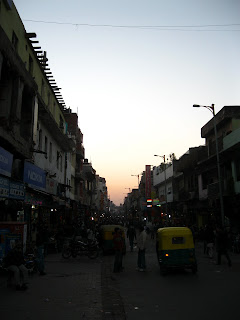 I started early, getting the metro to Chandna Chowk at around 8, forgetting that even in Delhi shops don’t open until 9:30 am at the earliest. So I spent my first two hours walking up and down alongside the hundreds of emaciated forms of the area’s homeless and hopeless. Those that were awake, fixed me with pleading eyes, some extended an upturned palm if they had the energy. Not many did. There was nowhere to sit unless I wanted to squeeze between the two piles of dusty rags that were in fact malnourished adult men so I kept on walking, absorbing the horror of the situation with each step. I went to walk around the red fort for some respite, but only got as far as a dead end where two dangerously skinny men sat atop a huge pile of rubbish sifting through it for anything worth salvaging. Another man burnt shards of plastic from the pile to keep warm.
By just 9:40am, already heavy with the weight of human suffering, I nearly had the first fight of my trip, down a shit-splattered market side-alley in Chandna Chowk over a Pashmina shawl. Admittedly, it is not the most macho of brawling scenarios. Nearly all Indians that I’ve encountered cannot tell the difference between the way I say two and three. I thought I had, after 10 minutes of vicious bartering, talked a man into parting with a pashmina for 200 rupees. In fact, I had said two hundred, held up two fingers and nodded until he too nodded in consent. When I handed him two 100 rupee notes and showed him the empty folds of my wallet, it was as if I had just accused him of bonking his own sister. He went ape.
Tired, confused and more than a little weary, I watched as he gestured violently at me and cursed me with rage burning his eyes. And for some reason, I uttered a phrase I have never used before or am never likely to use again – “Up yours, mate!” The fact that he couldn’t differentiate between two and three in English meant that the chances of him understanding this phrase were very slim also, however, it seemed to convey my feelings as he took two fast, ultra-aggressive steps towards me. I stood my ground, dazed and done with it all. I even called him an asshole as he screamed in my face. Today was going to be so, so much fun, just like a Sex in the City shopping spree around Manhattan with cocktails and comedy encounters. 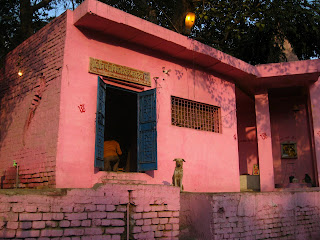 Dodging ox and hand-drawn carts towering perilously high with goods, rickshaws, cycles and every other form of traffic, I headed back towards the metro. I had prepared a bag of bits and bobs that I didn’t need – it was not a useful package, just a random assortment of shit that you would find in a man’s drawer in a family home – to leave with some poor soul. I then had doubts that the pair of Air Korea headphones, Chinese coffee sachets, highlighter pen and other detritus would be taken as an insult to a human being. Then, when I headed to the metro entrance, a three year old child ran up to me with a strange glowing machine that read your fortune or flashed or did something else in return for rupees. After I shook my head, he reached out and held the small carrier bag of stuff. I let go, he looked inside and then ran off screaming in delight. I felt sick.
Back in Pahar Ganj, I did the rounds of shops, bartered and bullied until I was broken and had only enough rupees to get to the airport, buy a coffee, and collapse. My final ten minutes in India was stood outside an expensive American-style sports bar with around fifty Indian men watching the nail-biting finish of the cricket and the bare-legged Indian women waitresses that squirmed on the otherside of a line of black marble tiles. Somewhere a large stereo was playing a pop song with the chorus, “I want to make love,” on repeat. Weird, just as it should be. I said goodbye and I boarded the plane to Colombo. 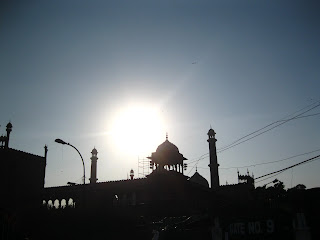 India in Snapshots
Missing in China: Monks and Mojos