When the world seems like an increasing hopeless place, it is tempting to retreat into yourself, into a shell away from it all, maybe even into the cold contours of a cave in the western mountains of China. Ok, so admittedly the latter is not available to everyone, I was lucky…

Travel in China is not the easiest. There’s the language barrier, the language barrier, and, yep, the language barrier. There’s also the usual complications to contend with such as being too tall for the seats (I always end up wearing my knees like ear-muffs) with a backpack bigger than your average Chinese passenger, trying not to show even a grimace of disdain when someone sends a streaky greeny inches from your feet, and not knowing which stretch of barren landscape or which cloud of urban smog is your final destination.

Yet China has much to experience and there is no option other than to dust yourself off, chisel the dried phlegm from your boots, and hit that road again. This time I am heading for Lijiashan, a village in China’s Shanxi province where the forty or so local families all live in caves. It sounds like a mythical land and somewhere I want to be. I want to spend a night in a cave and forget about the world.

But it wasn’t going to be easy. The journey was already shaping up to be harder that most – I had to make my way from the old-world charm of Pingyao to the industrial city of Lishu and from there onto the town of Qinko where it was then an hour’s hike through the mountains to the cave-village. 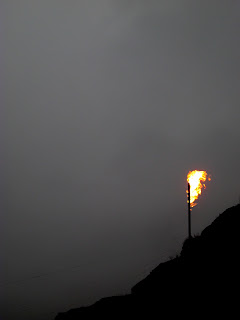 I left Pingyao early and with the help of the anaesthetic fug of pre-dawn travel, things were going smoothly. It didn’t last long. At Lishu, I hit my first snag. I discovered that I had arrived at the wrong bus station and needed to get to another bus station on the other side of the city. I clambered into a tiny taxi with several Chinese who had all mimed to me that it was necessary to do so – it was a gamble. We trundled across the ugly, polluted sprawl to the other bus station, which turned out to not be a bus station at all but a patch of brown grass surrounded by dirty, crowded, unmarked buses. I gambled again, this time on the pointed finger of a small man, who had indicated a small bus, with just a small amount of authority in his eyes when I had asked ‘Qinko?’ It was enough for me. I jumped on the bus and squeezed myself and my backpack into a seat.

Shanxi is a poor province. Heavy industries like coal and chemical production make factory owners rich whilst killing the poor through abhorrent working conditions or slowly, and more painfully, through the pollution that hangs over the scarred landscape like a veil. On the journey from Lishu to Qinko, I see old men hacking at soil to exhume shrivelled lettuces whilst flames from pipes lick the grey skies behind them. Chimneys pump out endless plumes of toxins and there is nothing to see. In cinematic future dystopias, the cityscapes at least have light from neon signs, in Shanxi there is no colour just an overwhelming, omnipresent grey. Not once is it pierced by sunlight or noble gas glitz.

Eventually, after several uncomfortable hours, the bus comes to a halt on a dusty road by a grey river – I guess that this is the monastery town of Qinko and time for me to get off the bus. I take out the directions that I have on a piece of paper in my pocket – I must cross the Yellow River, walk for an hour along a road that hugs the mountains and then head up blindly over several steep hills until I arrive at Lijiashan. Simple. 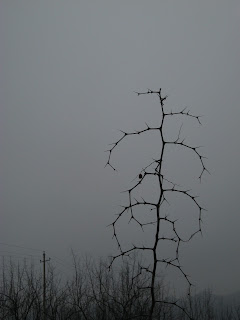 After forty minutes of ascent along trails lined with skeletal bushes, aggressively gothic with sharp thorns and clawing finger-branches, I begin to worry that I have taken a wrong path. But just as those nauseous moments before full panic arrive, I spot my first cave. It is not a natural cave, or at least it doesn’t look like your traditional caveman cave, it is more of a tunnel-house skilfully carved deep into the rock face. I continue up over a ridge until I find myself looking down at a valley dotted with cave houses. I had found Lijiashan. 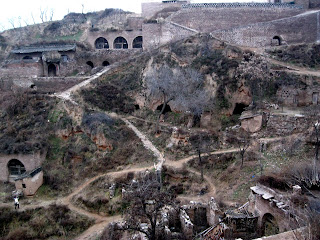 And as I made my way down the slope, I felt that mix of unease and excitement that comes when you enter somewhere alien. It really was a village of caves. I didn’t know what to do –  should I shout something English and commanding to announce my presence like a nineteenth century coloniser? was it actually possible to knock on a cave? At the back of my mind, there was also the child-like logic that suggested I shouldn’t disturb any creatures that might dwell in dark caverns. I tip-toed further into the village, repeating in my head the word “Hello cave people, I am from England. En-ger-land!” in the plummiest of accents.

From high up on the opposite side of the ridge, I could see arms frantically beckoning me. I made my way up along tiny steep paths, past pigs rutting in pens, two children playing with stones, a lady drying fruit under a tent, and caves, lots of caves. The beckoners, it turned out, had a spare cave that they would let me sleep in and food to feed me too. 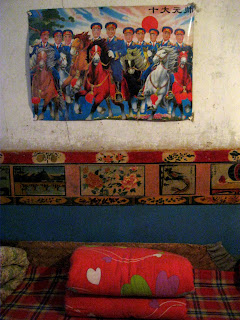 It was a strange sensation walking into the cave for the first time. The walls were rounded, smooth, and painted, and not with stick-men firing arrows into pigs but matt emulsion. The bed was built out of bricks. There was a small fire enclosed in concrete attached to the end of the bed. There were the most ridiculous Mao posters on the wall – it was the bedroom of a camp communist teenage troglodyte.

The owners of the cave were friendly and warm, fussing around me, arranging when I would want dinner, feeding wood into the fire that would heat my bed and my cave. They looked like they have never strayed into the outside world. Once they were satisfied that they’d given me a crash course in cave-living, they left me and I decided to take a walk around the village.

I sit down on a narrow path and look out over the caves and distant hills. It is eerie, but endlessly peaceful: a strange but simple way etched into the landscape before me. A man comes out from a cave behind me, carrying a small stool which he places next to me. It is his dinner time. The noodle soup smells delicious. I like the fact that although he has lived here all his life, he still likes to eat his evening meal outside and admire the view as it fades away into night. We exchange words, nods, and contented murmurs, not understanding each other’s language but feeling the meaning.
When I return to the cave, I am greeted by a hive of activity. The husband is pumping a wooden handle to oxygenate a fire for cooking whilst the wife puts the finishing touches to a mound of dumplings. As the pan begins to boil, ingredients are added and I take over pumping the fire. Soon the son returns and it is time to eat. Dish after dish of vegetables are placed on the small table. It is a feast: delicious and endless as all feasts should be. 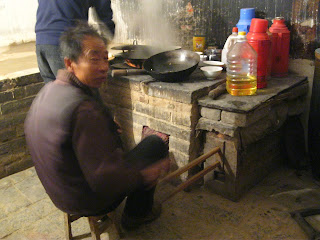 In the comfortable lull brought on by eating 37 dumplings, I watch the faces of my companions. We talk a while with our features. The mother is nearly blind; she can’t see anything unless it is held a centimetre from her eyes. I pass her a picture of my family which she touches to her forehead in order to make out the strange white faces. She smiles as I indicate each relation; she repeats the name for each in the local dialect. Her friend comes to keep warm and look at the foreigner. We laugh together.

Eventually everyone becomes weary of conversing without understanding and a decision is made silently to do something special for me. In a grand ceremony, the father removes a veil from an old television set at the far end of the cave. It flickers in to life and we all watch as men in women’s clothing sing in screechy high-pitched voices. It is surreal; too surreal. After ten minutes, I have had enough. A part of me craves a world where transgender karaoke is not prime-time viewing.It is bitterly cold and it is time for bed. I walk outside to the toilet and urinate by the flame of my lighter. I then walk the fifty metres back to my cave and stretch out on my brick bed, warmed slightly by the fire that has died a slow death in the concrete urn. I pile blankets on top of me. It feels strange to be in a cave. I play Bob Dylan on my MP3 Player through a speaker, it somehow softens the darkness, makes the sub-zero temperature bearable, and lets me know that this retreat from the real world is only a temporary one. 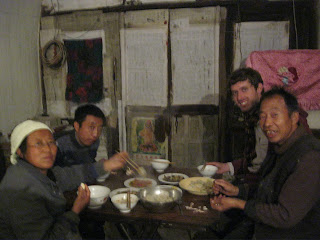 We Are The Clowns – Beijing
A Day in the Life: China Daily