China Daily is a daily English-language newspaper in China. I know, the name gives it away. What the name doesn’t reveal though is that the paper is a mouthpiece for the Chinese government.As predictable as the pro-government rhetoric and West-bashing diatribes are, there is also something fascinatingly random about just what news is covered by the paper. You get a version of China that the government want you to see or don’t care enough to hide from you. Here is a selection of stories from Wednesday December 7th 2011:

178 abducted children were rescued from a child-trafficking crime ring by police.

Children are being kidnapped across China at a rate of up to eight a day.

Key quote: “We will gradually eliminate the market demand to reduce child-trafficking at its root.”

The use of the word ‘gradually’ is particularly interesting. Surely there are very few things that demand a sense of urgency more than children being abducted from their families and sold onto people who want to buy stolen children. The concept of a ‘market demand’ in relation to kidnapped children is also fascinating: it would appear that even wanting a stolen child is a consumer choice now.

‘Stray Dogs Saved’
On the same page, and thematically linked, is this story about several dogs who were rescued from a meat market in Lanzhou, Gansu.

Key quote: “More than 30 dogs, most of which were sick, were saved.”
It paints a slightly surreal picture of China, in that one of the larger state’s provincial capital is still a place where stray dogs, ‘sick’ stray dogs at that, are snatched up from the alleyways, caged, and taken to market to be sold as meat. The reason why this story is newsworthy is that the dogs were rescued. In smaller, lesser cities and towns these sick dogs are sold and eaten without a hiccup. Yum yum. 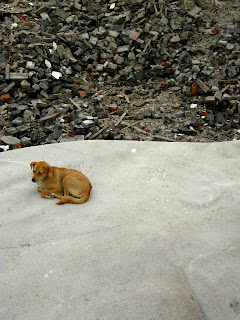 ‘US woman seeks her roots in Yunnan’

A US student, raised by adopted parents in the US, is now looking for her biological parents despite them abandoning her for having “slightly deformed feet”.

Key quote comes from the potential father: “We put the baby into a paper box on the side of the road…, and we hid at a distance. We didn’t leave until we saw a vehicle with a plate registered in Kunming stop, a man get out, notice the baby in the box, and take it into the vehicle.”

The 21-year-old student is currently awaiting DNA results to see if this man is her biological father. When asked about the potential impact of the result, he stated, “If the test proves she is my daughter, she is welcome to visit her home, and we would like her stay with us for a few days if she would like to.” Awww – it’s enough to turn your heart to mush, ain’t it?

This story is interesting for a number of reasons. Mainly, in that it highlights a huge problem that still exists in China where poor families (the majority of the Chinese populous) can’t afford to keep a child with any physical impairment at birth, however minor. There is no welfare system. Consequently, on a daily basis, a child is dumped at a hospital or on the roadside in the hope it will be looked after and adopted. Unsurprisingly, not all of them then decide to seek their parents out.

‘Smog has air purifiers flying off the shelves’

Northern China is smothered in a horrendous, highly-toxic pollution cloud which has resulted in a huge spike in the sales of purifiers, masks, and any other thing that offers people some protection from this terrifying smog. Interestingly, the article does not refer to it as pollution but as ‘bad weather’ and talks about ‘anti-dust’ measures. They go on to side-step the issue by talking about how not cleaning your air-purifying filters is dangerous. 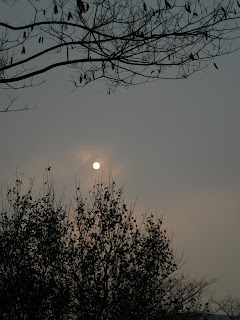 The Chinese government recently decided to increase the poverty marker of a daily wage to a single US dollar, allowing the millions of people who earn less than a dollar a day to claim some limited form of financial support from the state. Previously the benchmark figure was considerably less than a dollar. A letter, supposedly written by a member of the public, in response to the news reads thus: “At a time when an increasing number of people in the West are facing a decline in their living standards and when poverty in some countries is increasing because of governments’ mismanagement, China does just the opposite and helps the lowest 10 percent of its population live a better life. This is a highly commendable decision.” The words turd and polishing spring to mind. 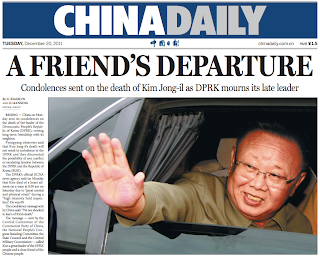 Caving In: The Retreat to Lijiashan
China Snapshots – Pollution Postcards