I’m On The Night Train

The passing from one train carriage to another is like moving between worlds. A successful crossing is only achieved by surrendering yourself completely to the heavy smog of cigarette and cigar smoke produced by the men that gather around the train’s moving parts to fill their lungs and stretch their limbs.

If you are lucky, the next world emerges, coughed up in a row of staring eyes and a pulse of familiar noises: the slap of playing cards on an upturned suitcase, the deep hacking as someone tries to dislodge some stubborn phlegm, and the tired jokes of a man selling polystyrene trays of shrivelled fruit and vegetables.

Passing between realms is dangerous. There is every chance that the thin threads that tether you to reality will fray and snap altogether, leaving you to crawl around amongst sunflower husks, cigarette butts and shit-smeared tissues looking for a way home.

I am carrying my glass canteen of dried green tea with me. It serves to anchor me to one existence as I surf recklessly between these parallel universes in search of hot water.

Eventually, I find it – a bubbling cauldron of boiling water hidden behind an iron door. I hand my flask to a man dressed in dirty white overalls with a yellow armband who holds some dominion over this furnace and its frantic licking flames. He promptly returns it to me. Clutching the warm cylinder to my chest, I re-enter the smoke; it’s time to find my way back to my own time and place, further down the line. 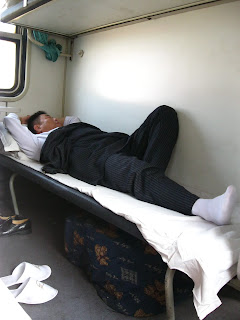 At one point, I would guess around four a.m, half an hour after the baby has stopped screaming, I become acutely aware of the snoring. The man on the lowest bunk, down to my left, has a deep reverberating snore, a guttural rolling of rocks around a dented metal cauldron. The body directly to my left on the middle-bunk looks alarmingly like Mao in his mausoleum. His greenish flesh, his body motionless yet the breathy putting, flapping free from his jowly crevices lets me know he is alive. Above me, a teenager joins the chorus with a series of high-pitched nasal snuffles, a counterpoint to the older men. There are other snores rising from the neighbouring beds. It is quite incredible this cacophony and wholly unbearable. I lie in my bunk and allow sanity to escape from my pores like sweat. 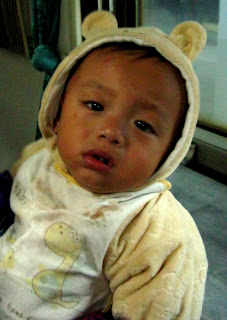 Three hours later and it is light. A mother tries to amuse her baby from the bunk below me. She makes noises and moves various objects – a cup, a sweet wrapper, a hat – in pleasing arcs. I am so tired that I hang my head from the bunk and watch, wide-eyed and smiling, transfixed and doing my best not to dribble contentedly.

A few minutes later, the music starts up and the women begin dancing in the aisles like a succession of Terry Wogan’s performing the Floral Dance. I have no choice but to abandon sleep and get up. I swing my lanky Western limbs from the bed, knocking several Chinese men to the ground, and lower myself victoriously into the aisle. Without opening my eyes fully, I make my over and join the dancing women, working the stiffness from my limbs with a shimmy here and a rotating wrist movement there. 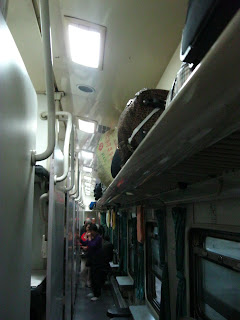 It is all I can do to resist the temptation to take one of their hands and spin them around in endless circles as China melts outside the windows. Suddenly, the train passes into a tunnel and a hellish wind whips up, biting blindly in the darkness. I stop dancing and fumble my way into the no-man’s land between the carriages – it is the darkest, windiest and noisiest place. It is a pocket of nothingness and the only way I see fit to fill it, is to sing Shaggy’s Oh Carolina at the top of my voice. I can sense that the old man smoking the day’s first cigarette is scared, but carry on to a second verse regardless. This needs to be done; I need to finish what I have started.

After I have indeed finished what I started, I sit and eat my breakfast – an apple, a carton of orange juice, two croissants and a fresh flask of green tea. One of the train attendants, who I have been casually flirting with for the past 15 hours, walks by and quickly thrusts a pointy shell into my hand. It sits damp and glistening in my palm as I try to figure out the significance of this unusual gift. Deciding that it makes about as much sense as anything else, I climb back into my bunk for Exile On Mainstreet and several more hours of window-watching and occasional daydreams.

Is it a worse experience than hitchhiking in Madoi county? Find out.