One day a young boy went to the woods. He spotted a shiny penny in the undergrowth. He bent down, thrusting his hand eagerly into the leaves and twigs. It felt wet. It was wet. Wet from the urine of a bad dog who liked to urinate just as much as he liked to bite.

The penny turned out to be a bottle top.

The boy didn’t want to but knew he had to…he smelt his hand. It was dreadfully smelly. He wretched a little then began to cry. Tears, like constipated turds that did not want to leave but could not stay in, came. The boy looked around for his mother. Then remembered with a sense of sadness that she was with Auntie Pam.

The boy crying and alone with a hand that smelt of the urine of a bad dog walked without seeing. He left the path that he always took, that everyone always took, and headed through a field of bluebells until he reached a darker, colder part of the wood. Not that he knew it yet, but he was close to the cave.

Of course he found the cave and of course he was drawn to it. The blackness called him. Once inside, the boy walked around with hands stretched out in front of him. He could see nothing; hear nothing but the sound of his heart in his head. He would stop and sit awhile and think.

He stayed in the cave for a long time, but then maybe no time at all. There was no bad pop, no haircuts, no buy-one-get-one-free deals on cleaning products, no adverts for Injury Lawyers for him or anyone else, just the darkness, and the songs and pictures in his mind.

He was twenty-seven when he left the cave. He now knew that the urine of a bad dog could be washed off a hand as easily as a bottle top could look like a shiny penny. He had chosen Mindhorn. 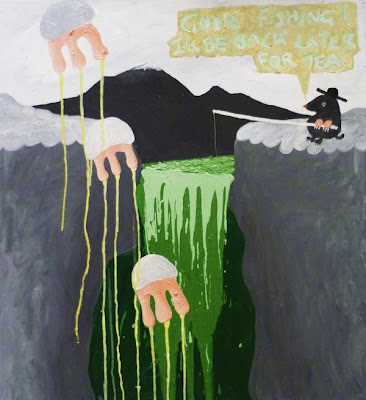 I wrote this for an exhibition celebrating Mindhorn – a concept developed by artist Adam Crosland who created the above painting.