When I flippantly mentioned in my last post that I had, but for some fractured recollections of fireworks and greasy chips, experienced memory loss from 11: 30 pm onwards on the 31st of December, I was conveniently forgetting some details. It seems in fact that there was more, much more that I had chosen simply not to remember.

Today, I received a text message from my friend. In his message he informed me that I had “pinched” some of his much-coveted sparkling Shiraz on that fateful night. Apparently, upon being discovered mid-steal by his rightfully pissed off girlfriend, I received a “telling off”. His politeness and euphemistic phrases barely concealed the ugliness of the situation. The black befuddled night sky of my evening just got darker.

As I sheepishly replied to his text, mentally I was transported back to their house. There I was, standing by the fridge, swaying slightly, holding the bottle of wine. Now I’m in motion, lurching from their house. Shamefaced and brow-beaten, I embarked on the long journey home.

Later, as I walk home from work, with the wind biting, pummelling, at my cheeks, a horrible sensation passes through my body. I have felt this before, but worse, much worse. And then a single image fills my mind. The image is of a step ladder stood in the middle of a residential road. I had seen it on New Year’s Eve. Now, I’m back on that night. I’m walking alone through the quiet streets of leafy Redland. And there it is; the step ladder. I remember thinking odd, very odd. And then passing the ladder, and bang, I feel intense pain as icy white foam batters my already frozen face. I am being violently sprayed in the face with the full force of a fire extinguisher. Now I’m running away, but wait, I stop. I spin around. I’ve gone all Ray Winston. I’m hurling the C-word at my assailants, removing my gloves for fighting and more expressive hand gestures.

I am struck by the fact that I was walking home alone. Why would I be walking home alone? Where was my girlfriend for God’s sake? My three assailants have turned to answer my abusive call. They’re not even wearing glove. Aahaaaa ….. Oh, I think I remember now. An argument. Me calling my girlfriend some horrible names; some names stored up in my nasty bank for such times. She was not going to listen to me insult her. She had left me stumbling several hundred metres behind her. But what was the argument about?

My memory is returning piece by piece. For some reason, I am now able to watch myself stumble down the road. Why the hell am I tottering so much? Surely the alcohol alone was not enough to cause me to stagger so much. Now I see it; I’m carrying something heavy in one hand. It is a carry case of stolen alcohol. I’m carrying a Co-Op wine bag full of “pinched” wine and cheap fizzy pop. My girlfriend, ashamed of my kleptomania, bewildered at my need to carry half a hundred weight of non-branded lemonade for the four mile walk back to our house in sub-zero temperatures, long-suffering at my flaky hands, had finally had enough when I suggested she carry the bag for a bit.

The argument is with me now in full bristling, vicious clarity. I had asked her to share carrying duties when my arm had begun to wither under the immense weight of three bottles of wine and six litres of pop. She had told me to discard the cheap pop as it was completely irrational to lug thirty pence worth of Asda’s own brand halfway across Bristol. That night, in my confused state, this statement had been a ridiculous declaration of my girlfriend’s unabashed extravagance and capitalist fickleness. (The cola incidentally remains unopened in the fridge. I wondered how it had got there.)

Well, that sequence of events is with me now. A segment of my night is confirmed. Unfortunately, the rest is confined to blackoutdom or so I hoped. Photographs are springing up on the Internet. These photos are of me, though I barely recognise myself. I do not remember when these were taken, by whom, or even where. I do not wear glasses. Yet, the below photograph, is of me in glasses. I have never seen these glasses before. How did this happen?

My girlfriend, when I apologised for being a bastard, took it upon herself to inform me that the fire extinguisher-wielding attackers were using the step ladder to film my attack on camera. This is all I need. Somewhere on the internet, amongst the ugly photographs, is a video of me getting sprayed full on in the face, then getting all big man only to shrink away at the idea of a fight and the thought that my priceless pop may become compromised in the fracas. Basically, on New Year’s Eve 2008, I got punk’d and didn’t even get it. 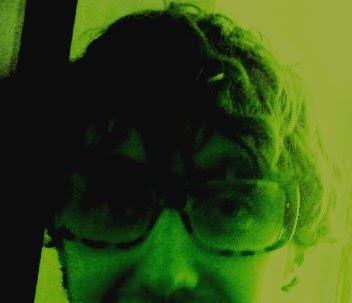 A Year of Contrasts: 2008 in Review
Death of A Salesman: Recession Hits