My legs are dragging. I am barely able to lift my feet. For the last four hours, I have been walking up a winding path towards a ridge that seems constantly to hover just one kilometre further. My only company has been cows and crows, and briefly, several hours ago, two small children with a catapult. With more than a hint of menace, the children had demanded my crisps. After refusing to part with my lunch, they fired several large rocks into a spindly tree some distance away. I opened a packet of biscuits and gave them one each. “Better,” one says, as the other returns the slingshot to his pocket. 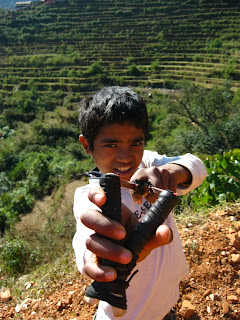 The map I possess is beyond useless. The path marked between villages as a dotted line meanders in opposite directions to the path I am on. There are no signs, no way of telling which collection of stone huts is which village, no friendly farmer to offer an encouraging smile and a pointed finger. I may, it dawns on me, be completely, hopelessly lost. Maybe it is time to think about bedding down in a cowshed rather than risk freezing to death in the wilderness.

The sun has now disappeared behind the unreachable ridge and the temperature has plummeted. My feet shuffle through the dust like a pensioner advancing in a Post Office queue. A water buffalo trundles out in front of me and stares. After a few awkward seconds, he breaks into a run. Perhaps, I will not die of exposure after all: a vital organ punctured by a stampeding beast suddenly seems far more likely. Thankfully, at the last moment, the buffalo detours into the undergrowth. It is a good omen – I hope. 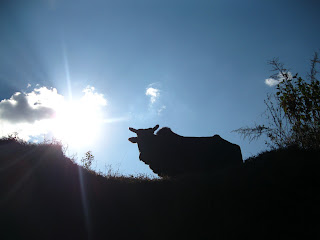 I am now walking through thick forest. Occasionally, the trees break and I can see the Himilayas; pink clouds licking up at the mighty pyramid of Machapuchare. Still, the questions repeat in my slow-working, mildly-panicked brain – Where the hell am I? Is this the way?

It is all too apparent now that I have failed to prepare adequately for this walk. I am here on the advice of a Pokharan shopkeeper who was desperate to sell me the decidedly dodgy map scrunched in my pocket. He rattled off village names which I underlined with a Biro as he offered encouraging words like ‘beautiful’, ‘not too steep’ and ‘less hard’. It doesn’t help that the last time I could confidently indicate my position on the map was when I was stood in his bloody shop. 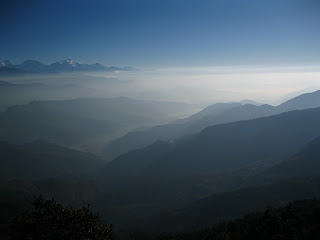 I start mentally imagining how to build a fire: what would make the best kindling, whether to circle it in stones, and how close I should lie to it in order to keep from perishing in the Nepalese winter at 2000 metres in the shadow of the Himalayas. My water is almost gone. All that remains of my biscuits are a few granules of sugar at the bottom of my bag and my crisps have become a sorry smudge of salt and grease on a foil packet. I’ll have to kill a crow or roast a cow turd.

Hoping to kick-start my brain and my survival instincts, I sit on a rock. I look at the mountains and panic in a very low-key manner. I then put on all my remaining clothes, and with a final surge of effort, head on, picking up the pace, into the forest. After a hundred metres, the trees begin to fall away and I can smell wood-smoke. The village of Bhangang spreads before me. I trot down towards civilisation, discreetly discarding the cow turd that I had earmarked for dinner. I actually made it. 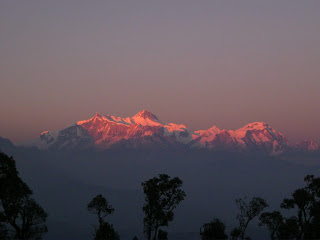 Dreaming of Dreads in Kathmandu
Screeches and Stones: A Stroll in Bandipur